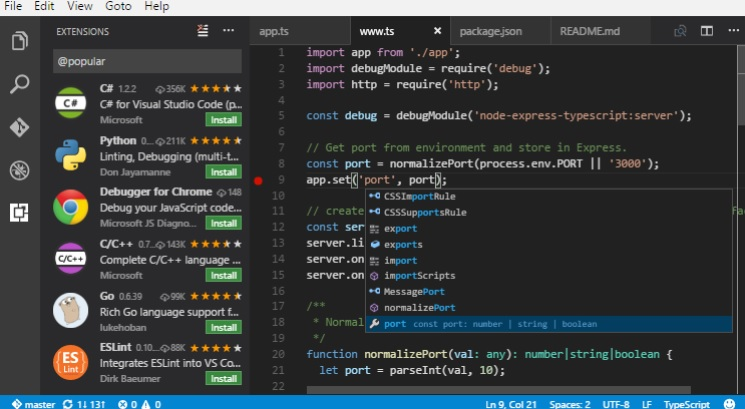 "Best code editor out there! Love it!"

Opmerkingen: Overall this is amazing, I wouldn't trade this code editor for anything. I used to use Coda on the Mac, and even though I miss the absolute elegance of that app, the features in VS Code overwhelm Coda to the point where I can't justify using it. I love VS Code. It does practically everything I could ever imagine wanting a code editor to do, and (for the most part) has a very clean and workable UI.

Pluspunten: This is an extremely well-featured code editor that also runs quickly. It is highly configurable and has an amazing plugin system with a huge selection of user-made plugins that can improve your workflow. Despite not being a fan of almost anything else Microsoft has ever designed or created, this software is an absolute TREASURE and the gold standard of code editors. Nothing comes anywhere near it in terms of competition in this space.

Minpunten: The only thing I find mildly annoying is the documentation. Everything is so heavily developer-centric, and the settings are stored in JSON files. That's fine, but most of the documentation makes a bunch of assumptions about your basic knowledge and doesn't spell out how to actually get things done. Sometimes I have to do a lot of googling just to figure out how to change a basic setting. This is somewhat of a minor complaint and often comes down to the plugin authors, but even Microsoft's own documentation when explaining how to turn new features on is often lackluster and requires a lot of pre-existing knowledge.

Opmerkingen: VS Code is so cool and compared to other Text Editors, to me it's definitely the best. Developer friendly, nice user interface and many extensions that really facilitate coding.

Pluspunten: - VS Code is constantly automatically updated with new features
- VS Code has the Command Line Interface (CLI) directly built in it which enables me to run any git command directly in the editor, without open command prompt.
- It's free, developed and maintained by a tech giant: Microsoft.
- It's so easy to use, as well as it is easy to install extensions to have more functionalities.
- I'm in love with the extension: Code share which enables me to share and live-edit my code with other team members. Remote Workspace which enables me to edit files on a hosting account directly via FTP.

Minpunten: - Sometimes slow to launch
- Too many confusing functionalities.

"One of the best code editors around"

Pluspunten: This is one of the best code editor available. Super fast and modularized. Set it up and add the extension that is needed. No matter what language or script you code in, VS code is able to handle everything given the appropriate environment set up and extension added. There's extensions for everything from formatter to intellesence and themes. Love the themes.

Minpunten: Depending on how many extensions you add and what multiple languages you use it for, sometimes it can be a bit slower in response. I personally use it for Java, python and SQL. Unused extensions should be cleared up periodically.

"VS Code Great for just Coding and Nothing Else"

Opmerkingen: Basic coding and general development issues. Not my first IDE to turn to. Benefits: Fast and easy to use and quick loading time if you need something faster than standard VS IDE.

Pluspunten: I like the simple layout is and easy to use interface. It does not take up that much memory and developers can perform most functions using code. I also like the ability to launch code from PowerShell or Command Prompt. Another thing I like is it allows for old-school coders to go to something with no frills or thrills. This is good for someone who doesn't want to add additional packages or features to a program.

Minpunten: Packages need to be installed via command prompt and ran through node.js to work within code. It takes too much time outside of developing. That is why I use standard Visual Studio because it is easier to add a NuGet Package from the VS interface than going through node.js.

Opmerkingen: Best for small businesses and teams working, especially for websites and web apps. Lighter on your budget and computer system resources. You get a library full of extensions/plugins enhancing features. User-friendly interface together with simple settings configuration. Fully personalized it according to the color scheme, coding language, and feature needed. I highly recommend it as a good package tool for full-stack web developers and programmers.

Pluspunten: I have been using MS Code to write and edit for web development and wordpress.t's very light on resources compared to full IDE's and available for multiple platforms OS. Small initial package to download and install. So it's being used for mostly web coding tasks in languages like Html, JS, CSS, and PHP. Community support is very great coming with new features and extensions with new updates. Documentation and many tutorials are available to learn it. The best features that I like in this code editor are syntax highlighting, error checking and IntelliSense.Lot's of extensions provided novel functionality. From theme to the language it is can be personalized to much extent.

Minpunten: Some extensions show internal conflict due to accessing the same part of API. Should handle conflicts efficiently. Debugging is sometimes a little bit confusing. More features like support for the desktop framework should be added like ASP.NET MVC Application.