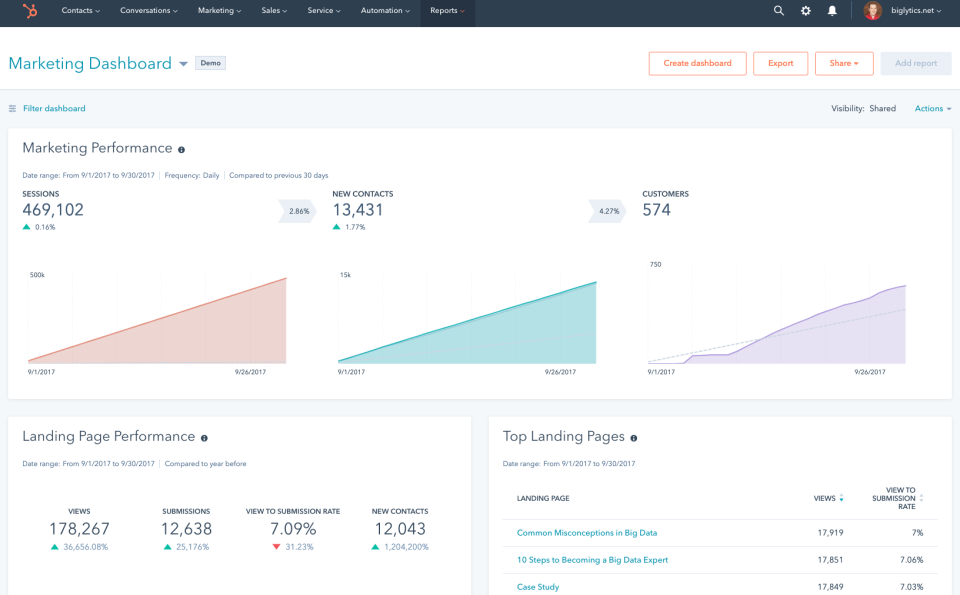 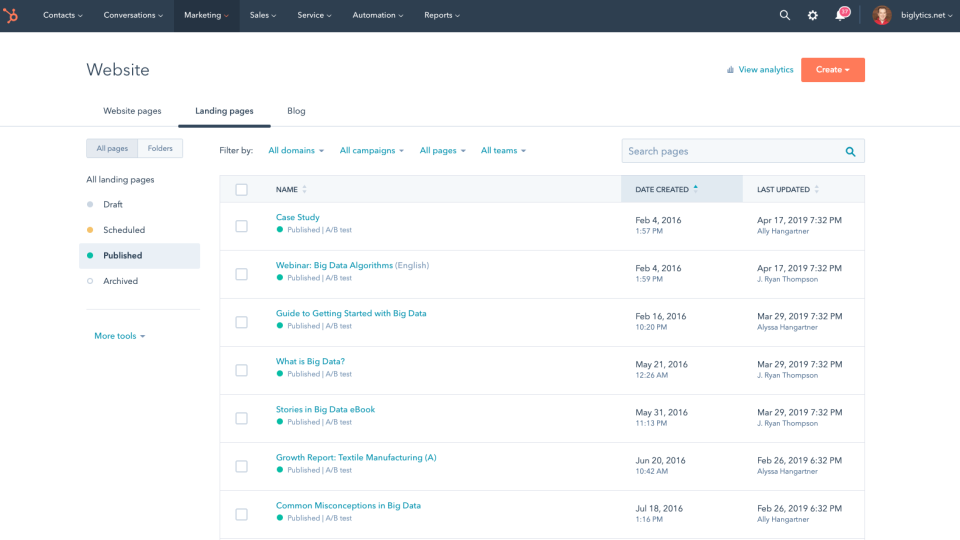 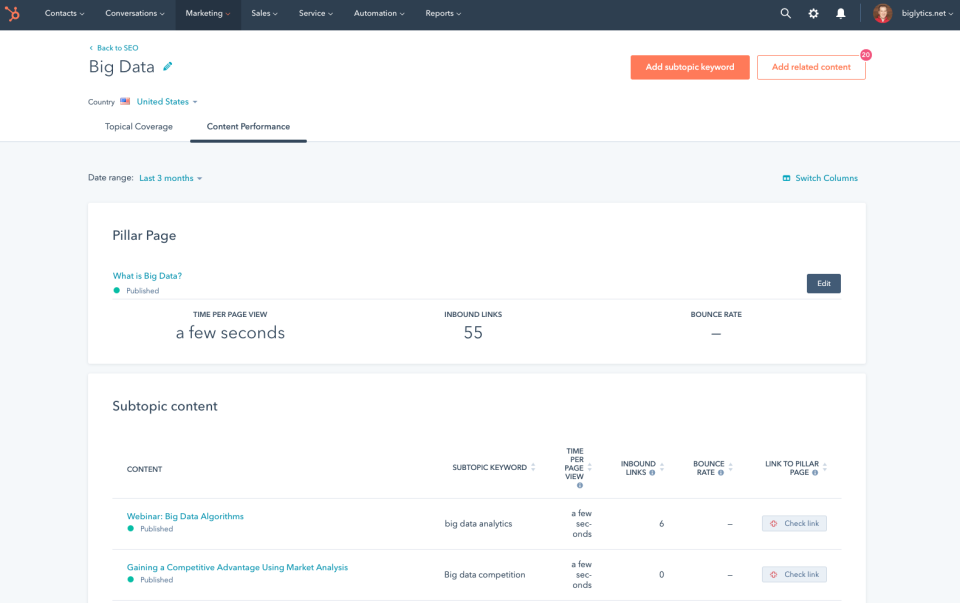 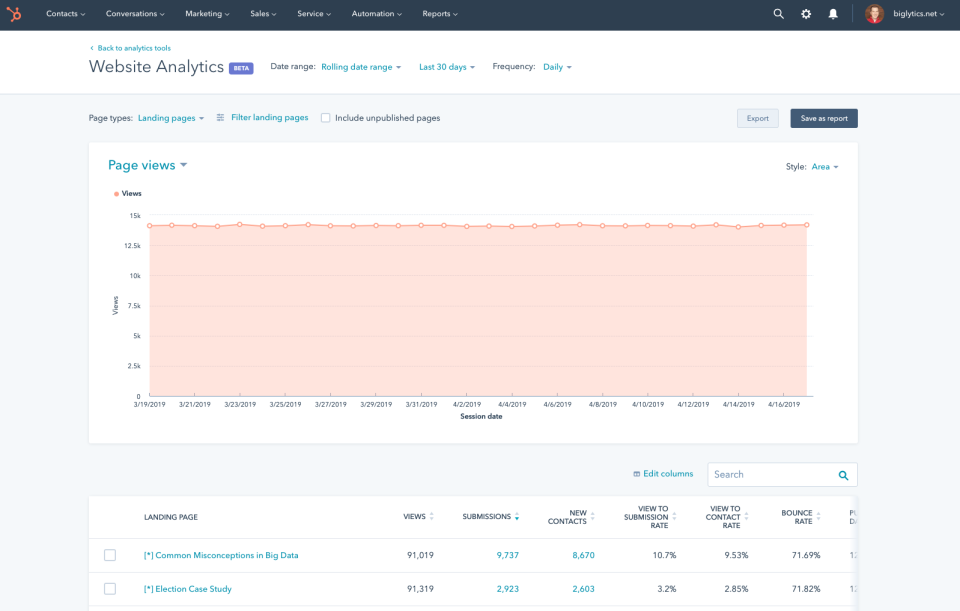 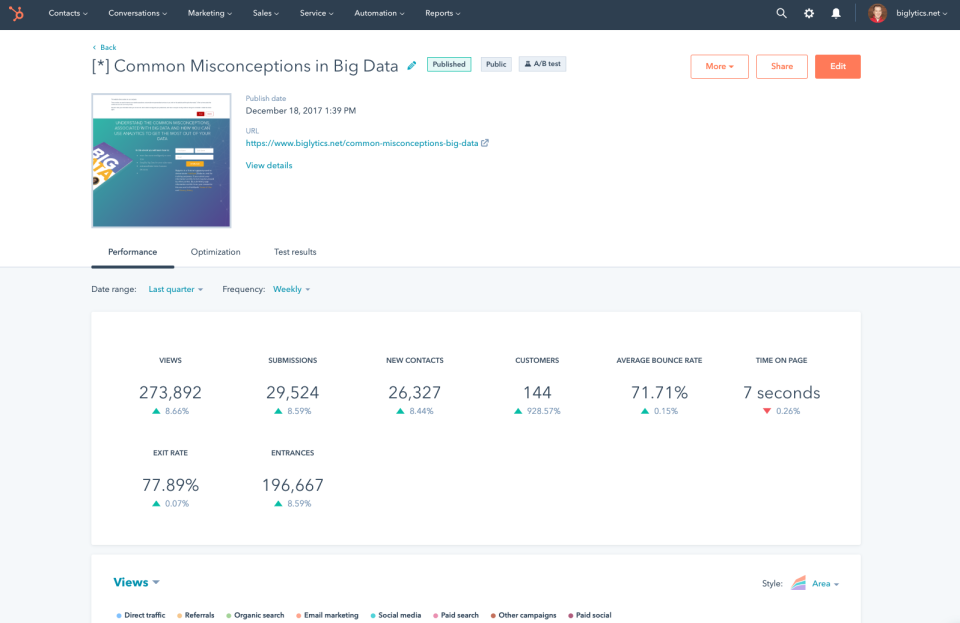 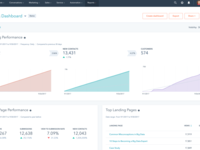 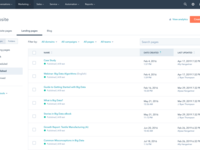 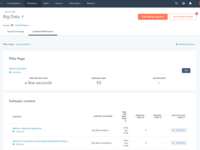 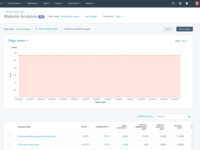 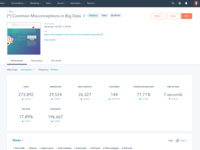 (0)
BEST VALUE <ALL included for one low price> You don't need 4+ products to Market/ Sell/ Support just FBP & it's easier to use ! !
Bekijk profiel Vergelijking bekijken

Opmerkingen: HubSpot is the best tool to use when learning marketing automation. Our marketing team uses HubSpot Enterprise for emails, forms, landing pages, web chat, and social scheduling. Our biggest pain point has been our third-party integration with our CRM-- we use Microsoft Dynamics 365. The more tools/features you're able to use in HubSpot, the more convenient (and powerful) it becomes as you really can benefit from having "everything you need in one place". But as companies grow, it gets harder and harder to maintain that vision. I wish we could take advantage of all of the HubSpot Enterprise features we pay for but too many of our existing tools overlap with them and that's where the importance of reliable integrations come into play.

Pluspunten: HubSpot has allowed us to streamline our marketing efforts so we can focus on what really matters. With We've been able to automates so many mundane processes that we used to do manually thanks to HubSpot workflows. HubSpot's ease of use also makes training and transferring ownership/management of the tool more efficient. What I liked:
• Simple, intuitive fool-proof interface
• Great support and learning resources
• HubSpot Academy makes it easy to learn marketing automation
• Workflows look like they were designed by a kindergartener-- I love how simple they are to understand and build

Minpunten: Six months into using HubSpot we outgrew the "honeymoon phase" as we started running into limitations with the platform, mostly involving integrations with other tools we use. At the end of the day, HubSpot is phenomenal at what it does but has real limits to it's function and flexibility-- it doesn't scale comfortably to larger enterprise companies/databases. If HubSpot fits within the scope of your company's marketing needs, it's a delight to use. HubSpot is built by marketers for marketers and it's run by a very human company that injects soul and purpose into it's products. Improvements I'd like to see:
• Better CRM function-- it was too limited for us to use
• Greater flexibility with reporting custom dashboards
• Ability to use spend/budget data from LinkedIn Ads connection
• Ability to A/B test automated emails without workaround

Opmerkingen: Overall my experience with HubSpot is amazing. I am using it on a daily basis and found it very helpful for my work. I am using it for campaign creation, campaign management, bulk emails sending to customers and new prospects, tracking emails, bounce rates, open rate, click rates which is a very amazing feature and accurate. I love the way I can manage all data and information which in it and fetching reports and creating dashboards is very easy and very informative in it.

Pluspunten: I like HubSpot easy to use user interface and powerful marketing automation feature the most. I love HubSpot mobile app which is very easy to use and effective, because of this now anyone can access their HubSpot account from anywhere easily with their mobile app and on the other hand I like their dashboard reports and email tracking system too.

Minpunten: There is one thing that I dislike about it and want to highlight it which is HubSpot is a little bit expensive but I can say also that this platform is worth to spend.

"The step up for when you're getting serious"

Opmerkingen: I've worked with Hubspot as an individual, with a large multi-national company and a medium-sized non-profit. I would say that most solopreneurs should probably stick with MailChimp or MailPoet. When you have a good budget for marketing, definitely consider a move to HubSpot.
I've also used Pardot by SalesForce and it's very comparable. I believe Hubspot is easier in the beginning than Pardot, while Pardot has better connectivity to outside systems (like SalesForce, of course).

Pluspunten: Hubspot is amazing, with great tools for list building, segmentation and email marketing. The process for building emails is easy and enjoyable and the workflow automation is a breeze. I've used MailChimp and Pardot and Hubspot is very different from either of those. Hubspot is for the company that's ready to up their marketing game to the next level while still being simple enough that your team can be onboarded and working quickly.

Minpunten: I'm not really a fan of the blog and landing page functionality and i really think you should do those on your own website and then tie them into Hubspot, which is fairly simple to do. Also, when you get into "Deals" and integrating sales and reporting from other systems, the simplicity goes out the window. It can still be done, but it's not as easy as the email marketing functionality.
Also, Hubspot has its own language and terminology, so it can be a bit confusing until you get used to it.

"A decent tool for marketing automation with a few key issues"

Opmerkingen: Hubspot is a good tool to start learning about marketing automation or if you are a small company with few leads to store. It is a visually appealing platform with some interesting functionality. The social media advanced scheduling option is one of the best features as is the ability to make easy landing pages. For basic marketing needs, this is a decent option. For larger companies with more complex needs, Hubspot has many issues that will impact speed and productivity.

Pluspunten: The customer service team is excellent and there is a handy chat function so you don't have to wait on an email response. For social media, you can schedule posts months in advance and view your marketing activities as a monthly calendar. Landing pages are also easy and quick to set up. This is a great tool for smaller organizations with limited contacts or leads to store who need basic marketing support.

Minpunten: The company continues to make unnecessary updates with little notice that often seems to decrease the functionality of the tool until the changes are reversed. Email is very difficult to use as the template you set up views very differently across multiple popular email platforms (to be fair, this is likely an issue with any email automation software). You also have to change your template in a different view pane from your actual email so you're constantly switch back and forth between views for very minor changes. The simplest spacing adjustment takes forever. However, the contact database portion of Hubspot is where we have the most trouble as it's hard to sort and group leads with any way other than by making smart lists or using personas. Your database will get messy fast and there's very little way to clean it if you are a large company which means over time you will be paying for useless leads in your system you cannot find and eliminate.

"Small to Mid Sized Business use"

Opmerkingen: Overall, its a pretty good experience, everything is extremely streamline, although I hope more features will be added in the future. I would continue using this just for like newer customers and keep older customers on our old system only because the migration is very time consuming. Each customer would have to be recreated due to the lack of migration tools.

Pluspunten: Great for small/startup or mid sized businesses to help their sales force track their sales data with many features for goals and customer data all in an easy to view window. Its pretty easy to setup companies and contacts with a ton of fields that you can customize. The file organization for each customer is easy to use and very self-explanatory. The software overall isn't overcomplicated and most of it is pretty self-explanatory. The emailing system is an excellent feature for making sure you have a record of all conversation with a customer.

Minpunten: So depending on the complexity of the business, the lack of features may be an issue, the software is pretty streamline right now just due to the limited amount of features available. I would've liked to see a few more options for file organization and customer organization. The email system as mentioned in the pro section is very useful in keeping track of conversations but it can only be applied to one customer at a time. It would be nice to be able to tell the software where you would like to store the messages. Another feature would be integration. There aren't a lot of options of integrating with custom CRM/ERP software right now, there are only 3 integration options available. So this is great for any company starting from scratch but alot of migration work for companies that have already established a system.