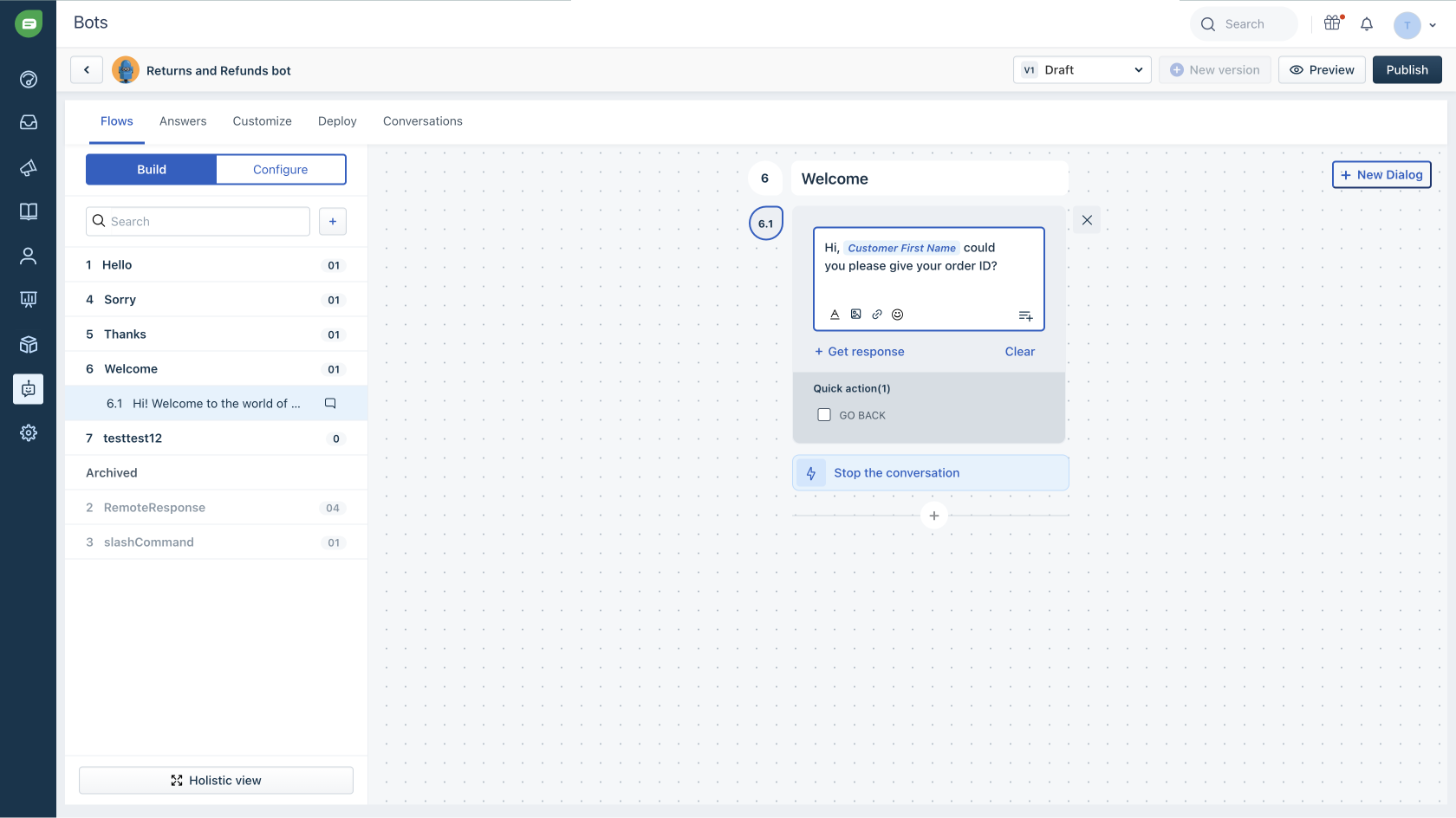 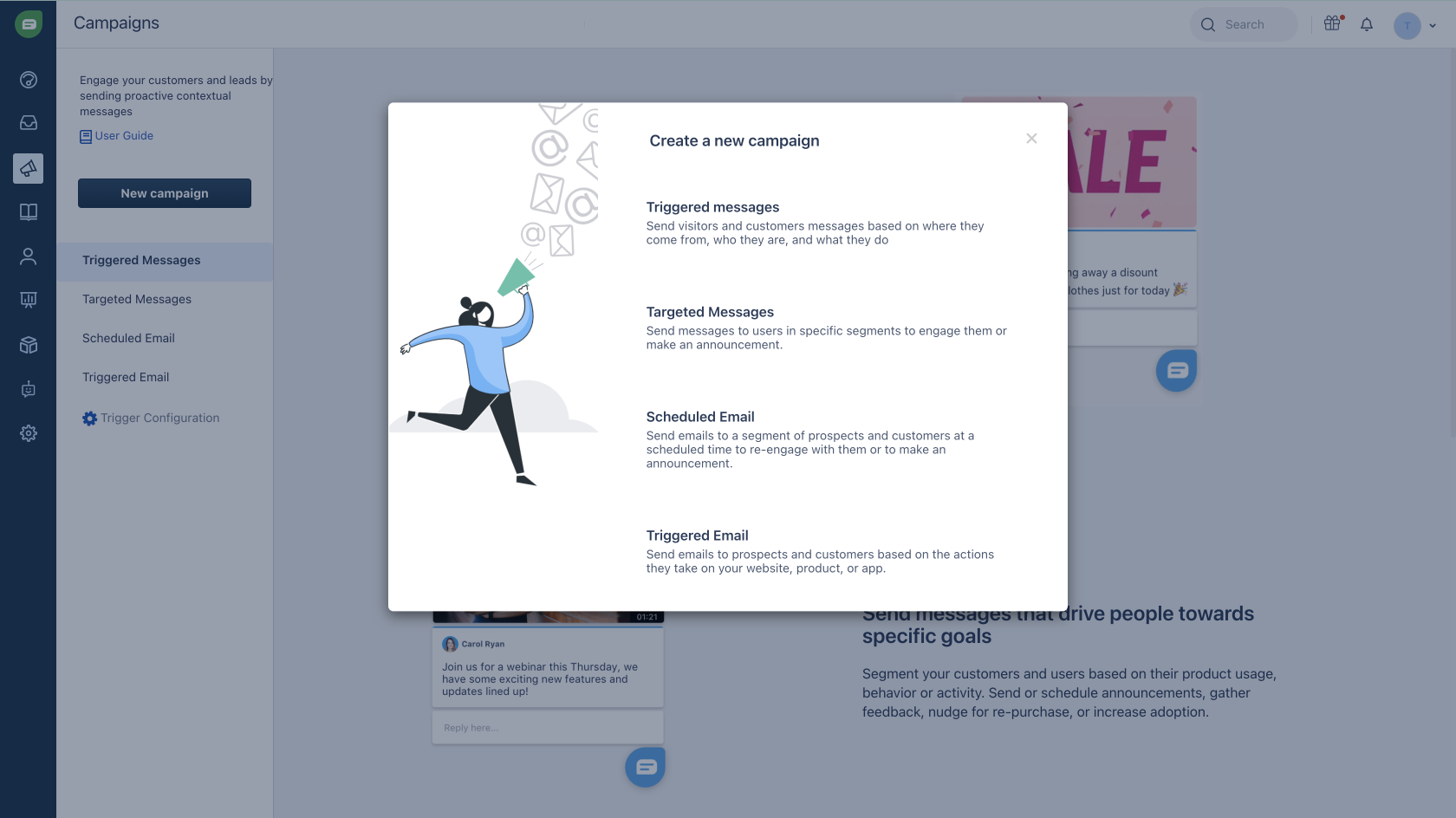 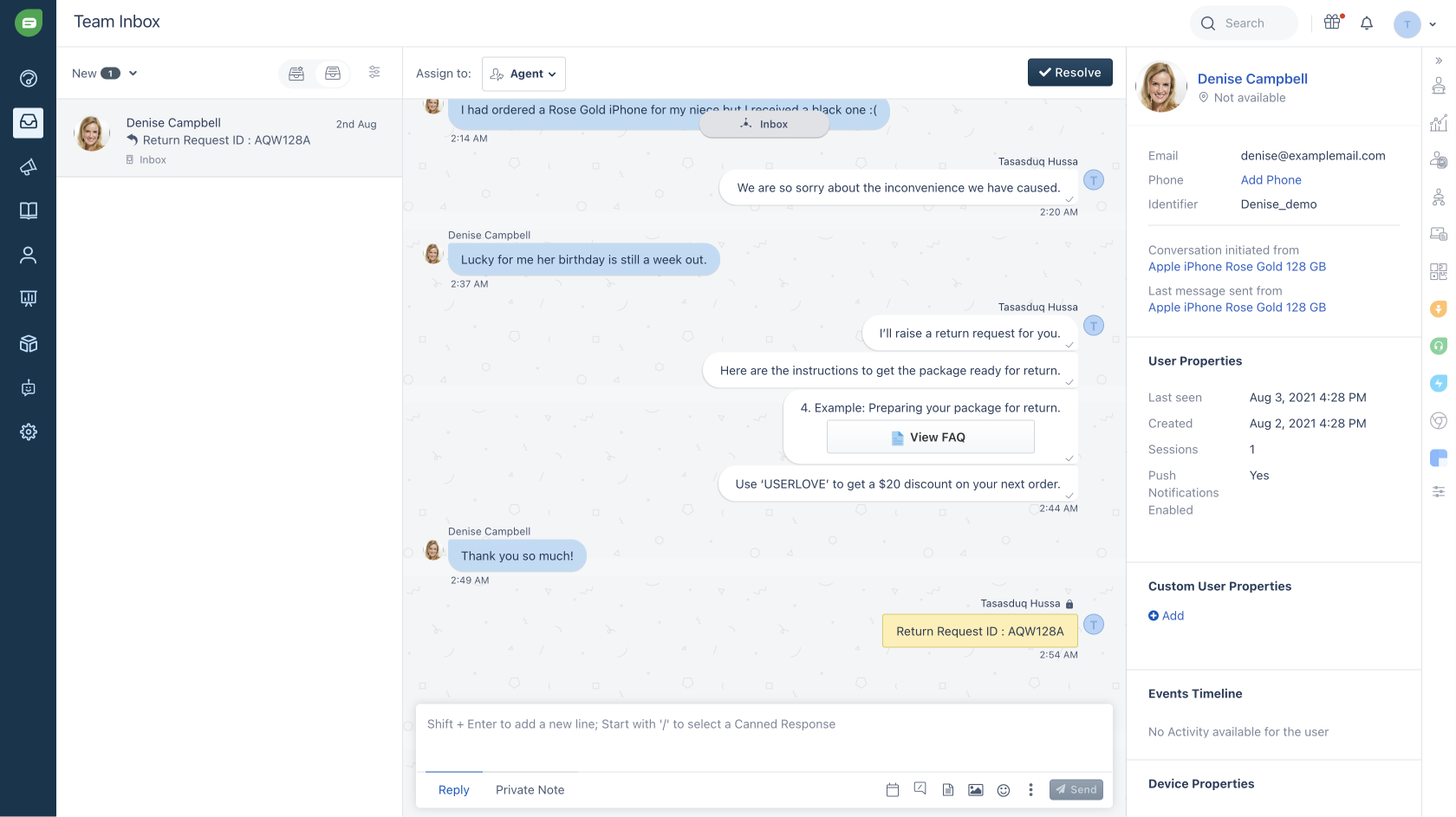 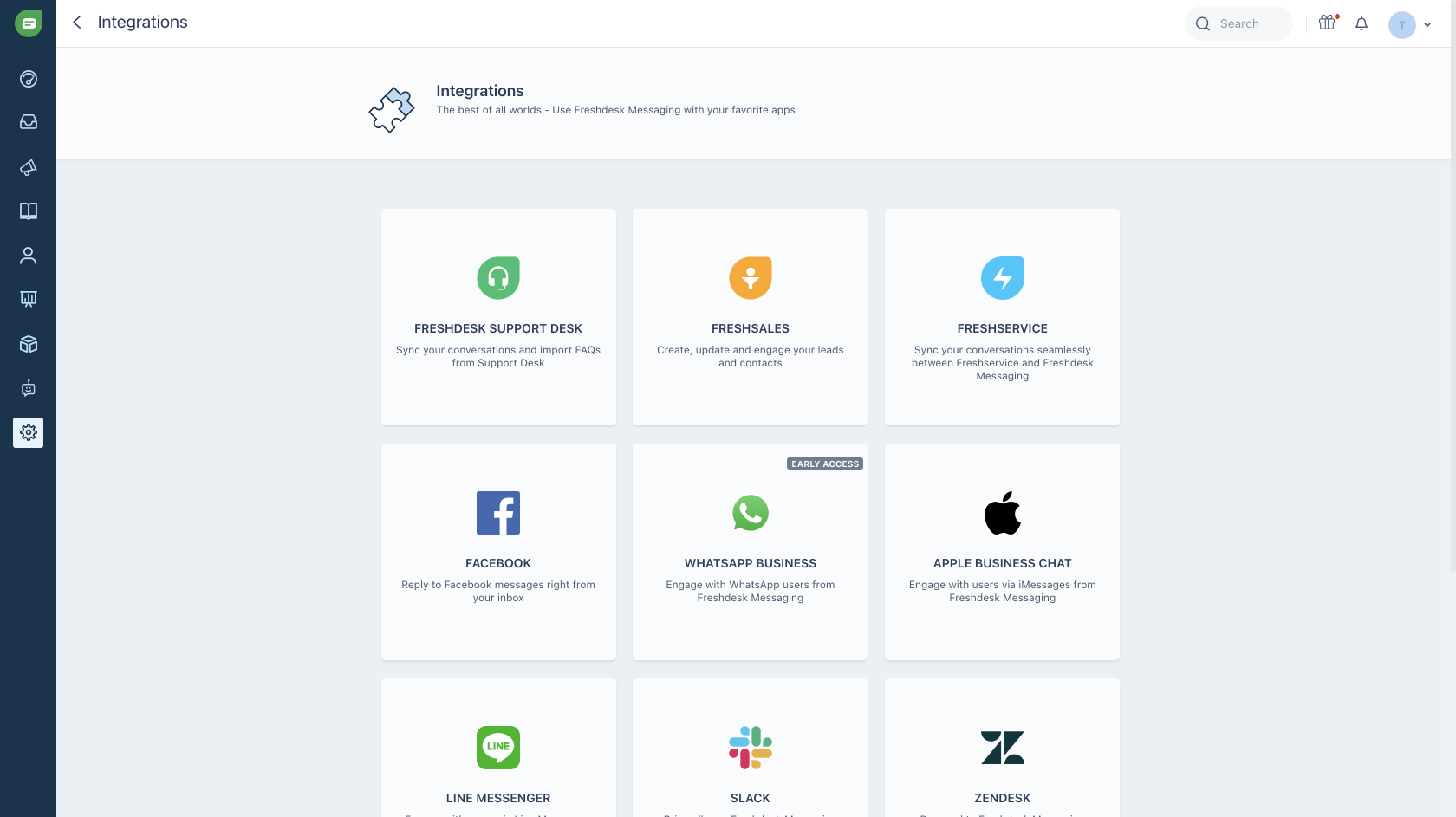 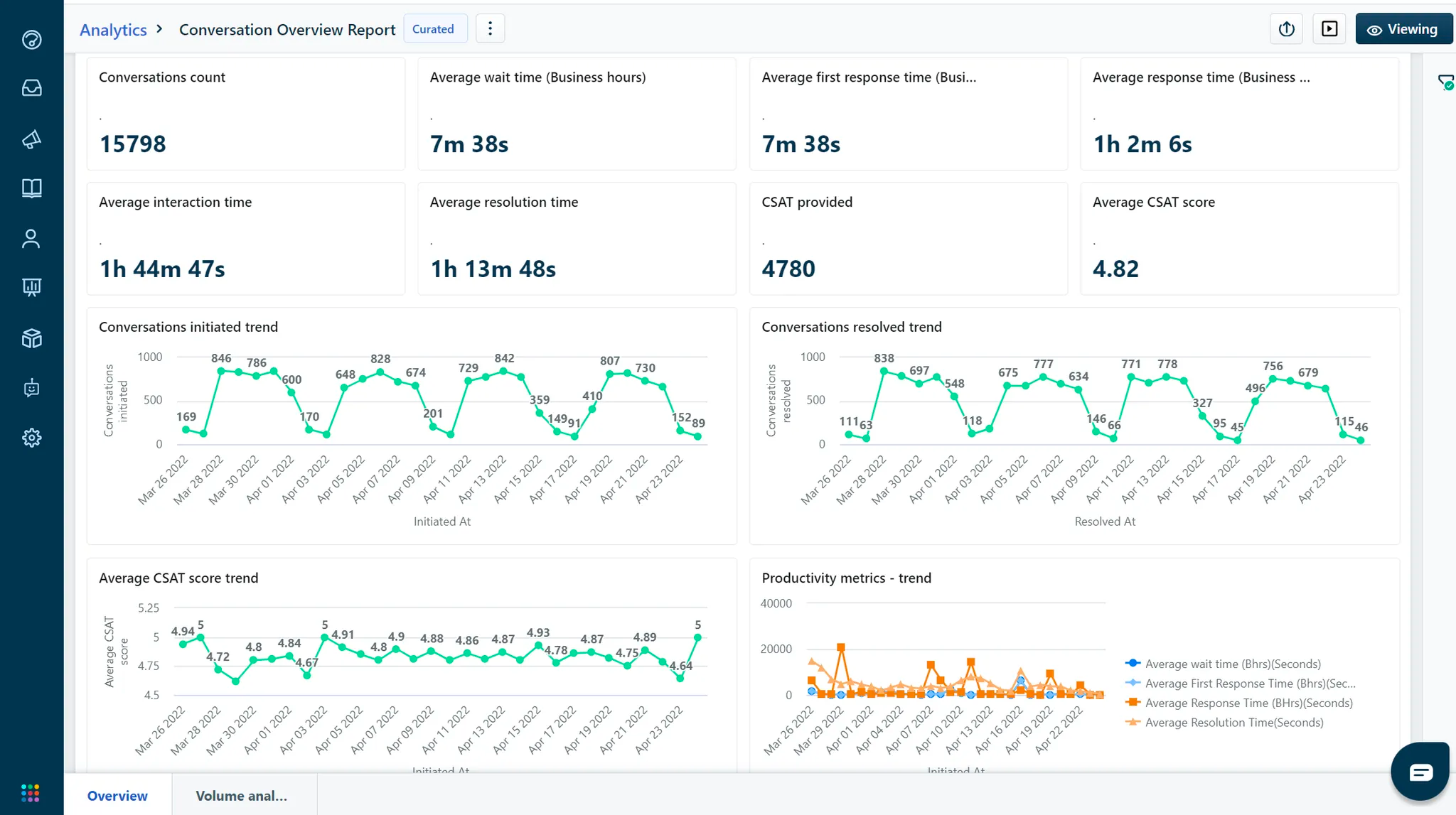 Opmerkingen: It was a good experience, but we always wanted an amazing experience.

Freshchat is the nice customer support software to help customers with immediate response.

It's not full functioned, according to me, and have the higher prices as compare to deliverability.

Redenen om over te stappen op Freshchat: It was a better tool as comparison from others in my alternative list during the time of purchase.

Opmerkingen: Freshchat has been a solid option to allow website visitors and users to ask questions and for me to interact with them, provide them with answers or point them toward a specific web page or resource.

The two things that really stood out for me are Freshchat's overall design and user interface and the ability to manage live chat conversations from either a computer or mobile device. The latter aspect is something one would expect from most live chat tools but I think that still isn't the case...

The one thing I didn't like much about Freshchat had to do with the smartphone app. I had two separate live chat widgets (each on a separate site) and in order to keep track of both, I had to log in and out from the app to access the interface related to the specific live chat. This aspect may not be an issue with some of the Freshchat plans but I found it not ideal since other tools I have used would make it possible to manage live chats embedded on different sites straight from just one dashboard.

Redenen om over te stappen op Freshchat: Because I had used another tool by Freshworks in the past and because of Freshchat overall presentation (features, design, etc.)

Opmerkingen: Easy to manage tool that optimizes customer interaction, an incredible tool to have for a lean team. Much better than their competitors with respect to user interface, pricing, and customer support!

We could set it up easily since we had a few Freshworks' products integrated. The pre-built templates setup for the chatbot help in answering most of the common queries, making human interference minimal.The dashboards are intuitive, helping us understand the functioning and areas of improvement. This helps us communicate with a potential prospect as and when they have a query.

Although the existing integrations help, I would love to see some more features added that can help us increase collaboration with teams. The mobile experience is not as smooth as what their competitors offer.

Opmerkingen: Freshchat is a quality chat program that can be difficult to setup and lacks the design quality of other competing brands

Once I managed to create an account, Freshchat was easy enough to setup and offered a lot of customizable features as well as the ability to add up to 10 users - all for free - which made it a useful application for our non-profit. Their API was also very well documented, allowing for custom code to be run to allow for certain things like triggering the chat via URL redirect, all of which was beneficial for a season.

The initial setup of freshchat - namely creating an account - was nigh impossible, and extremely confusing. Freshchat offers deep integrations with Freshworks suite of products, but for someone not looking to use their other products, it became a nightmare to start. Creating an account meant creating an account with Freshdesk and a couple other products of theirs, then it only would let me login to the admin panel of my overall Freshworks account (which doesn't allow for access to Freshchat), and then when I finally found the correct login page for Freshchat, their gmail login system would consistently fail and lock me out. In initial setup, I probably spent numerous hours trying to create a freshchat account, and ended up with two or three different accounts - most of which I abandoned because they wouldn't allow me to remove the extra Freshworks products I did not want. As well, basic features such as chatbots & email responses to chats were all locked behind a paywall - with a trial that failed to explain their use - and a customer service team that barraged me with numerous phone calls & emails asking me to upgrade from their free tier, even after I said I wasn't interested. Lastly, and perhaps this is user error, but freshchat failed to generate any sort of leads on our website; apart from occasional use, no one used the chat features - which changed the second we switched providers

Opmerkingen: Overall, Freshchat is a great tool for the customer support team. It easily gets integrated with most of the tools. We have used the integration of Freshchat & Freshdesk to manage live chat and tickets.

We were using Freshchat for managing customer support queries for a delivery business. I liked the ability of Freshchat to manage agents at scale with very good visibility for managers with tracking and reporting. The dashboard has all the options for viewing agents' performance and quality over time. We also used Facebook and Whatsapp integration to put chats of all channels into one place. This helped in improving the productivity of our team.

I liked all the features apart from chatbots. I found the chatbot very expensive considering the volume of our chats.