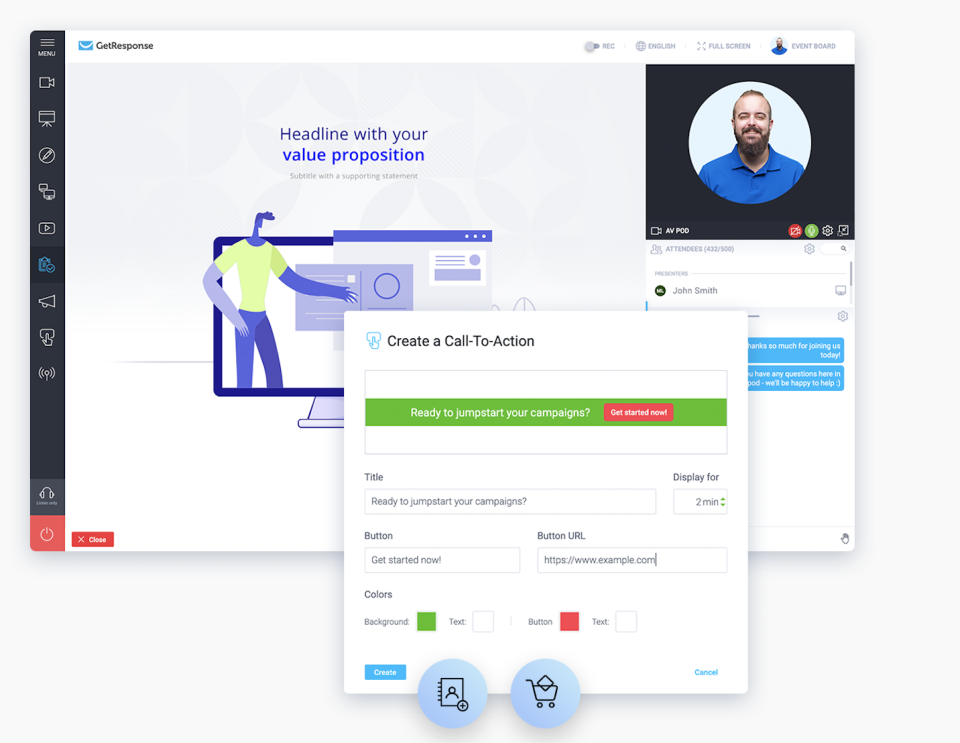 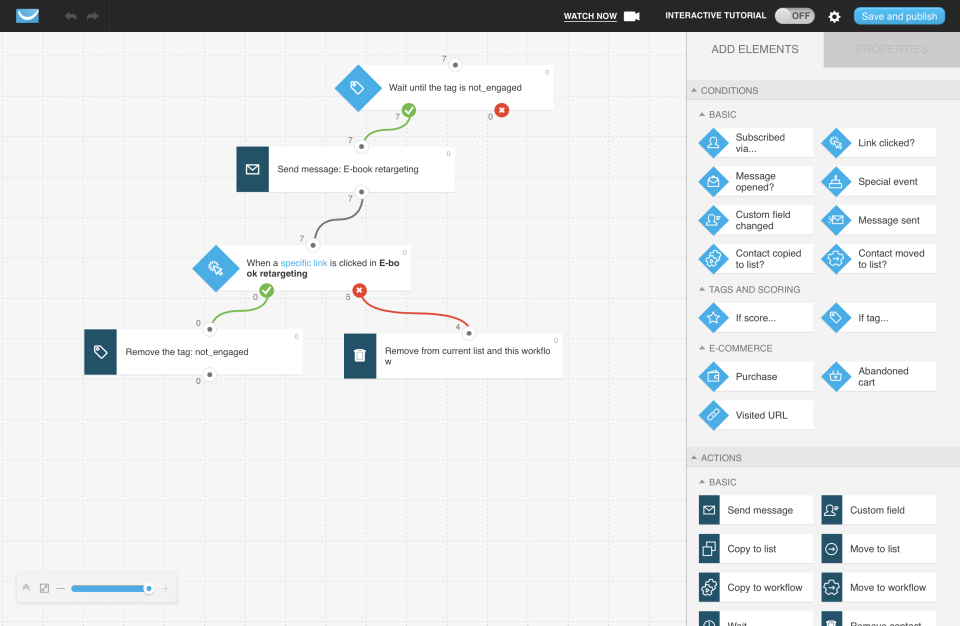 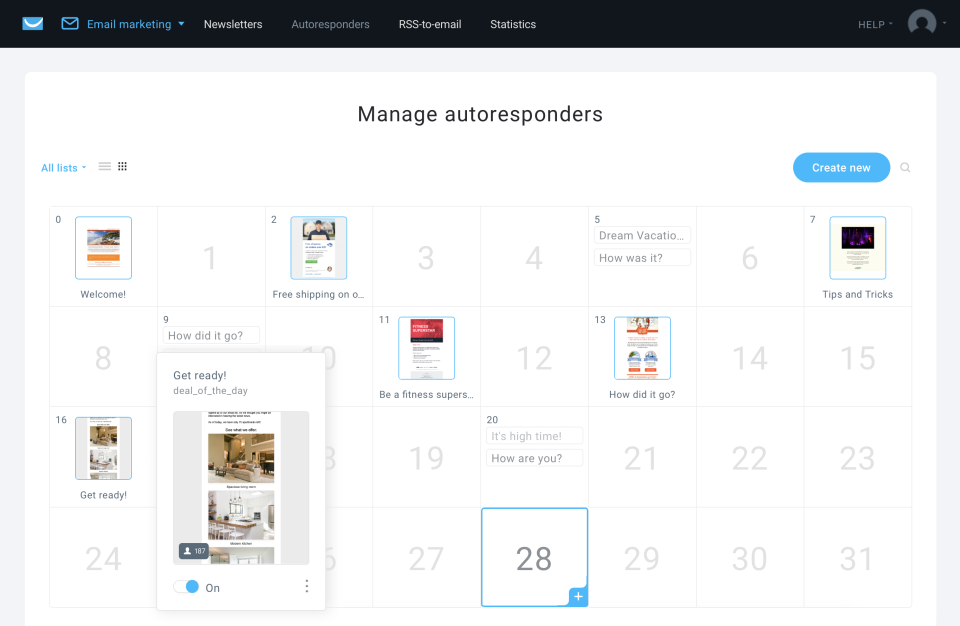 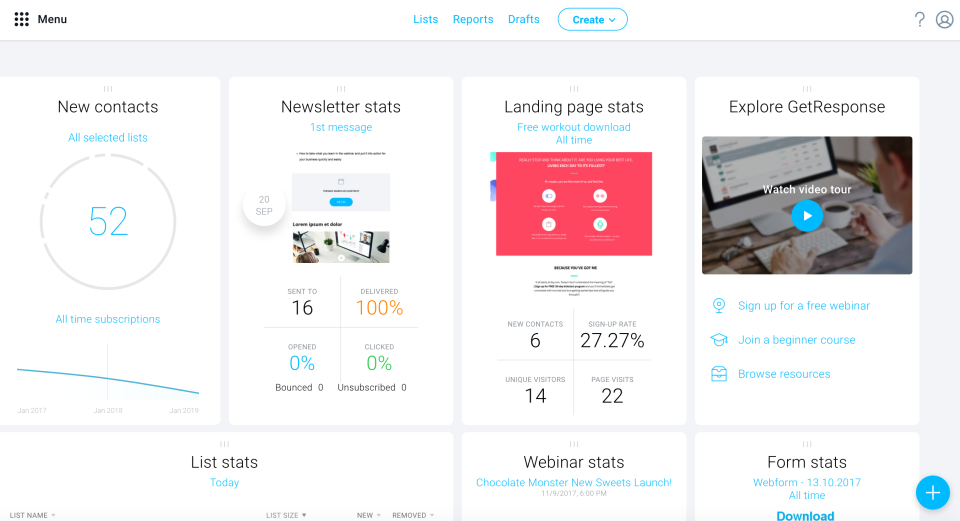 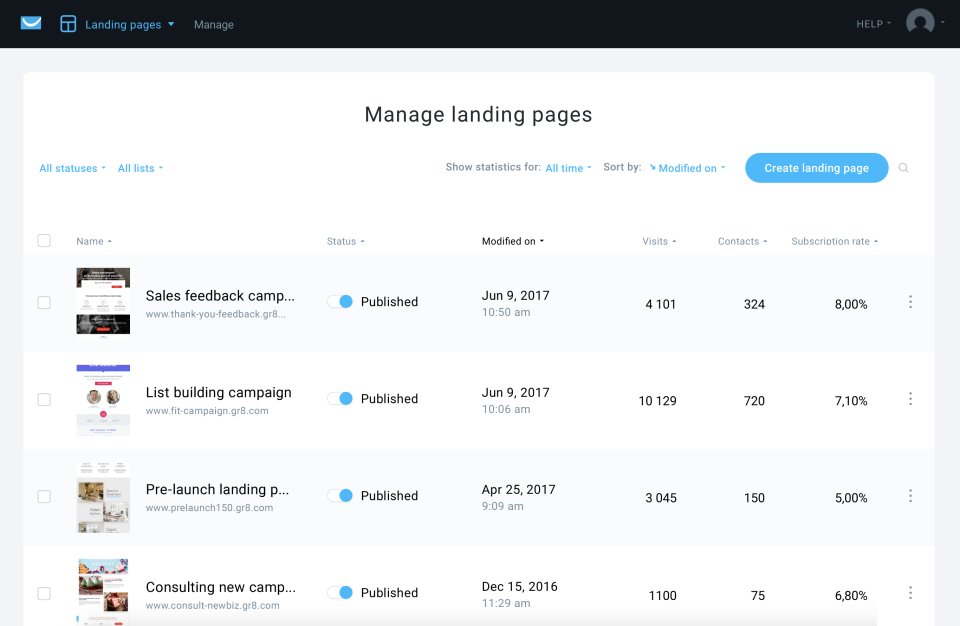 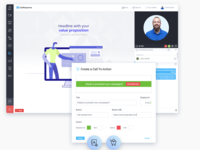 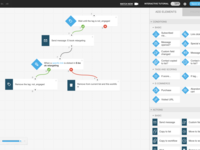 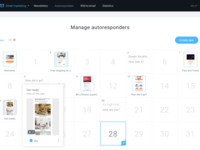 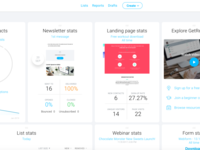 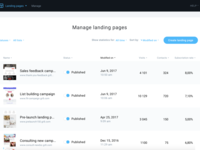 Opmerkingen: If you’re an affiliate marketer and want to get started on your email campaigns quickly this is the best software out there. They have super easy set up and their automations are easy to build. They’re of course seamlessly integrated with all the other known Lead capture tools as well.

Minpunten: - There was no free option
- It doesn’t let you open multiple tabs of same instance for easy copying and pasting
-

"GetResponse is a solid alternative to MailChimp"

Opmerkingen: Overall, our experience with GetResponse has been very positive. It is critical to segment your marketing tools from your back-end dependencies (MailChimp owns Mandrill!!!) and GetResponse has helped us succeed on that front without negatively impacting the end-user experience.

Pluspunten: GetResponse is a quality platform that has been very reliable with the design and delivery of our marketing emails. I really like the way that the emails look when they are delivered, and the level of control that you have over this within the platform. I don't think the User Interface is quite as intuitive as MailChimp, but the quality is just as good, the prices are more competitive, and the customer service is great. Any time I have a question, I can get a member of the GetResponse team in Live Chat to navigate me through it.

Minpunten: The ability to analyze data is severely lacking in GetResponse. MailChimp allowed exports of all email campaign data into Excel so you can manipulate and analyze data as needed, but for whatever reason, GetResponse doesn't do this. It is a very significant shortcoming (which I have also addressed directly with their support team).

Opmerkingen: We are working in digital agency and we have lot of projects of digital promotion and leads generation. We Work for client separately and have to create multiple email campaign for business leads using fresh email data. GetResponse is best software for email marketing. We can create campaign and create list easily. It provide advance option to design page template and send emails directly to customer. All templates in GetResponse are mobile friendly. Overall GetResponse is good solution for business sales.

Pluspunten: GetResponse is perfect solution to grow your business customer. We can easily increase business sales for our clients projects. GetResponse gives advance option to set multiple email campaign and targeted to bulk users directly. We can import and export emails list in our campaign easily. We can select multiple email template and customize email template by drag and drop option. Server of GetResponse is very fast and secure to send emails. We can easily track all emails and check response easily.

Minpunten: No problem face during use of GetResponse for our client business. It's useful to grow business by targeting customers in multiple countries.

Hi Anuj, we're thrilled to see that you've had such a positive experience with GetResponse. We love helping you and your customers reach your marketing goals! We'd love to learn more about the results you've been achieving with us. If you'd be interested in sharing them, please contact us at [email protected], so we can showcase your company in our communication. Thanks! - Maria

Opmerkingen: Get Response compliance department treated us with an inexcusable heaviness:
We'd been using GR for years. Things went well. It was time to build a new segment. The new emails bumped us to the next $$$ level. So, we used 'pay up front discount' (BIG mistake). We emailed the new list. Got some negative tics, due to some less than perfect hygiene on our part. Enter the disciplinarians:.
Get Response compliance offered 1 option: Kill the VAST majority of your emails. Then you can play again. We'd just paid them $X,000's for an upgrade, & they hits us with the 500 pound hammer. Imagine a Dr. visit: Dr. finds a questionable spot on a big toe.
Dr. offers one option: "Amputate BOTH legs now." We asked for grace. GR Compliance response: It's the 500 pound hammer or you're off line. Only one list triggered this review. We said: "Remove just the 1 list with issues." They would have none of it. GR would not be satisfied until they punished us irreparably. X,XXX of emails of individuals who are our friends and business contacts - all gone.
(See above note where GR prevented us from exporting OUR emails which WE had put into GR) Then GR locked out the potential for adding emails back - including the hundreds of perfectly good, very solid, very clean emails we'd added, 1 by 1 - & had not yet even had the opportunity to email yet!! All the work we'd been doing to add and clean up our lists... GONE. Leader to leader:
DO NOT do Get Response. Please heed our horror story.

Minpunten: There's no easy way to add one email to several categories at once. Example: You have one a customer email. You want to place that email in three segmented lists (which happens quite often). Unfortunately, you have to enter that same individual email THREE times. It felt to me that Get Response was stacking the deck in their favor with this non-functionality. You have to put in more emails, you owe them more money. It's possible that this was not strictly the case, (I never got out the calculator for this). From my experience, they could have made this option MUCH more user friendly. WHEN (not if) they place you, the paying customer, into a disciplinary review, they WILL lock your ability to export. You can follow the "it's easy to export" guides all you want to... you're not going to let you get YOUR contacts out of their system. (my experience) Get Response apparently believes that all those emails you've put into their system... those are not YOUR contacts.... you won't get them out if they have reason to discipline you... which they will. They talk nice and have cheery messages. But import something they don't like, they will, (with a smile), treat you as a paying customer like a redheaded stepchild. Is that the way you want to be treated? You might think that you're a good rule-follower and don't do things wrong... we paid them and used them for years. Then, one day they became punitive. It happened immediately after we paid them.

Opmerkingen: Overall I would like to conclude that GetResponse is the best ever Email Marketing tool for Begginer Blogger, Youtuber or Digital Marketer. If you run a small or medium business, then I highly recommended this Platform to use for Email Marketing.

Pluspunten: The below features I like most in GetResponse are as below: 1. I can build my customer email list easily and even export it to my local storage.
2. I can make landing page for making lead generation campaign and collect email.
3. I can automate the email in my email list easily.

Minpunten: The below features I don't like mostly in GetResponse are as below: 1. Their analytics are slow and confusing little bit than other platform.
2. Limited pre made email templates and that all are outdated.