Tired of infinite email chains and lengthy meetings that never seem to reach a group decision or result?
You need Loomio: a collaboration platform transforming how groups make decisions, discuss ideas and collaborate online.
Loomio is a safe place for people to have discussions and make decisions together, it combines a discussion forum with decision-support and facilitation tools to help your team achieve clear outcomes. 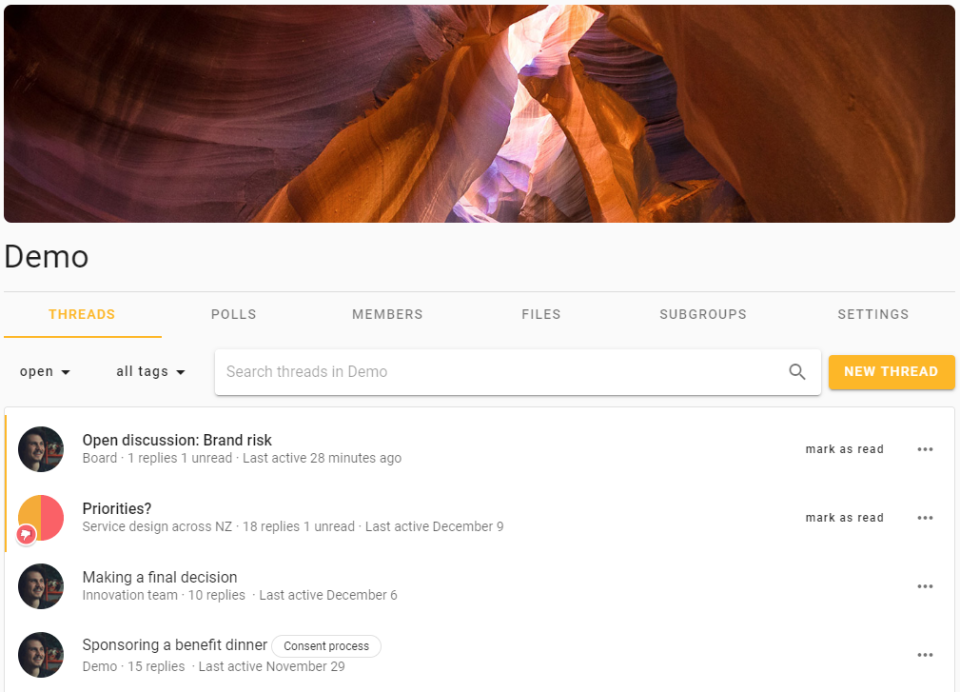 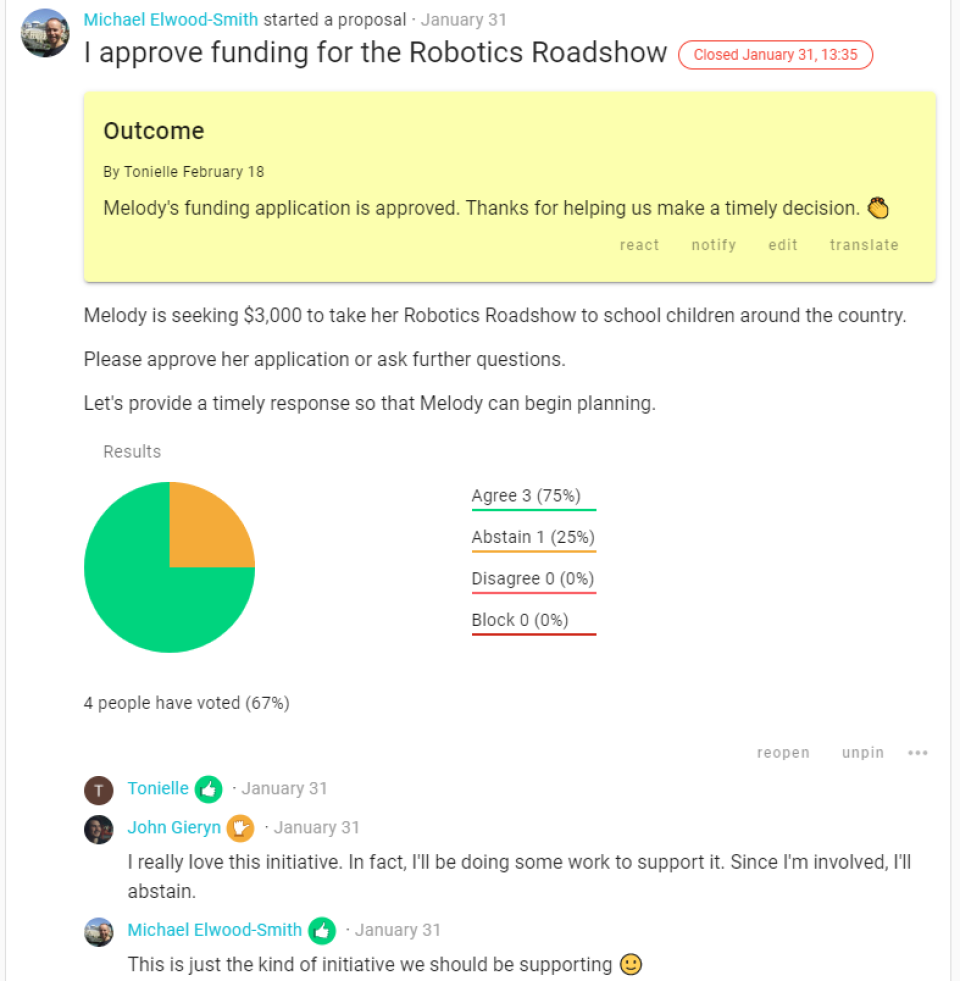 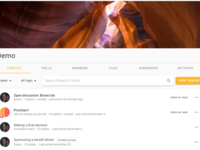 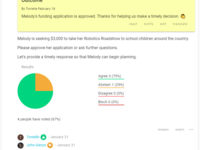 "The best tool for collaboration: Loomio"

Opmerkingen: We used Loomio as a Policy Incubator - users would suggest ideas and topics at one end, and polished publishable policy would come out the others. Loomio really helps bring people together, and gives them great tools to unlock their potential. Overall I really have been impressed by Loomio, and the solution has evolved with us.

Pluspunten: Loomio taps into the collaborative vibe of your community, giving you great tools for decision making. One of the best things is that Loomio is actively developed - so options you need are often available soon after you need them. Theres a great community of users who have customised and use the tools, so there is great support.

Minpunten: As a mobile user, I have found managing large groups can be difficult on small screens. Loomio have been great at improving the mobile workflows and including desktop class features in smaller form factors, which helps busy admins to keep their community running in the go.

Thanks Jo for the great review! We have more goodness in our mobile app coming real soon :-)

"Once you get engagement, it rocks!"

Opmerkingen: I've tried using Loomio for a bunch of different projects over the last couple of years, with mixed success. The problem I've found has been in getting people engaged in discussions. I've recently had great success in using Loomio to help run my Kiwiburn theme camp. Kiwiburn is New Zealand's Burning Man event, and my theme camp, Barrio del Chur, is the largest at the festival. We recently realised that we could generate significant capital through fundraising events, and this opened up the need for formal discussions around how we go forward as a community. We were suddenly in need of a legal entity to hold assets which had previously been privately owned and in need a vehicle for decision making that involves significant chunks of money. While we are yet to reach consensus in our discussions, Loomio has offered the perfect forum for Barrio contributors to voice ideas that are controversial and challenging to the way we've operated thus far, and to allow healthy discourse around all ideas raised. Our community has operated on a do-ocractic model until now, which generally means that the people who have the most time and are skilled in certain areas end up making most of the decisions. We've wanted to change that for the last couple of years. We've been encouraging people who have much to contribute but are silenced by the status quo modus operandi, Loomio has proven the perfect platform for giving these people a voice and a vote in decisions which affect a project that is dear to our hearts. And then there's all of the amazing writing that has been produced by the Loomio/Enspiral folks which has supplemented our discussions around organisational development! So many of the key questions that have been raised in our discussions regarding the Barrio have already been dealt with during the conception of Enspiral ventures, due to the comparable flat structures, shared purpose, and people-over-process approaches. There's a wealth of knowledge within this community, and it relates so well to how to use Loomio to make decisions effectively.

Pluspunten: ahhhh see above, I guess.

Minpunten: Sign in systems suck! I don't wanna sign in every time I come back, and things have been weird and messy when I have one google account that ties together 3 email addresses (one primary @gmail, two secondary @customdomain), Loomio is attached to the google account but then it freaks out when one of the secondary emails receives an invitation to join a new Loomio. The inbox dashboard kinda sucks too. it's overwhelming seeing that there's activity in so many discussion threads, I don't know where to start so sometimes I don't start anywhere.

Opmerkingen: We use Loomio in various ways to run our member-led campaigning organisation including:
- a remote Member Review Panel uses Loomio to review, discuss and vote on whether or not we should run each campaign
- our Governance Board uses Loomio for discussions and decisions on issues that need to be addressed in between their face-to-face quarterly Board meetings
- we used Loomio for our members to ask questions about, discuss and then vote on approval of our financial accounts, an amendment to our constitution and the appointment of new Board members
- we use Loomio to plan for and then make collaborative decisions about coalition campaigns run together with allies

Pluspunten: That it is designed specifically to support collaborative decision-making, as opposed to just discussion forums.
That is it simple to navigate, we recently added more than 100 new members to a Loomio group for our AGM discussions and voting threads and the vast majority of them took to it like ducks to water, with no need for much explanation.
That it can be used in a myriad different ways, we can adapt how we use the voting tool to match different kinds of proposals (from a temperature check in a campaign planning discussion through to a formal vote on Board membership)

Minpunten: It's difficult to put up multiple alternative proposals at the same time, you have to do one at a time and work through the discussions on that proposal before anyone can raise an alternative.

Pluspunten: The voting options are ideal for making a variety of decisions.

Minpunten: The lack of an app is about the only negative I have.

Thanks for the review Clayton, appreciate it. We're working on a mobile app and looking forward to update on progress soon.

Minpunten: Could be easier to handle group membership, particularly when people forget passwords.

Thanks for the great review Gareth! We have some improvements coming soon for handling group membership :-)

If your group members forget their passwords, you can ask them to use the 'sign in via email' feature when logging into Loomio.