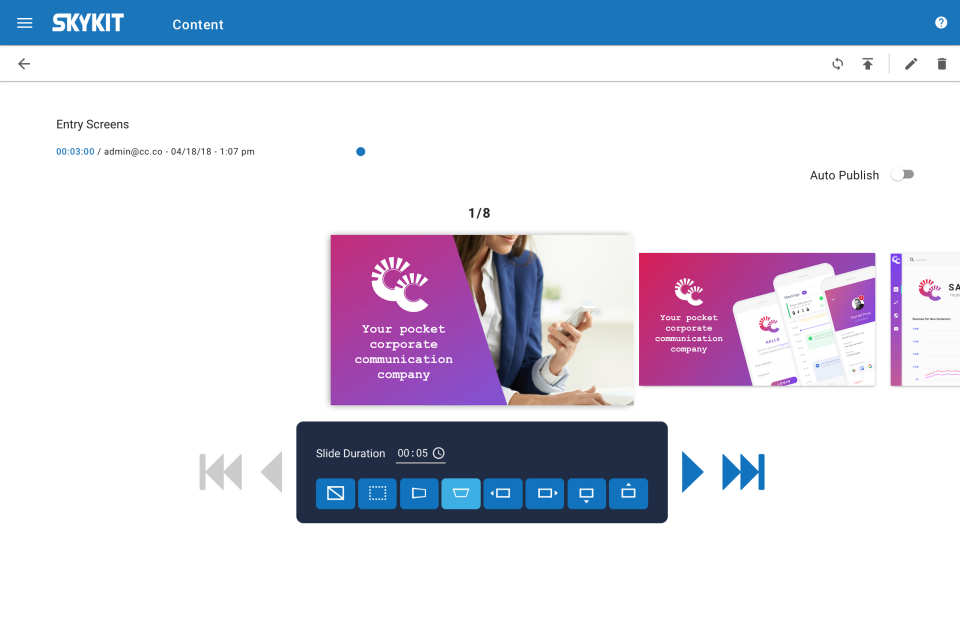 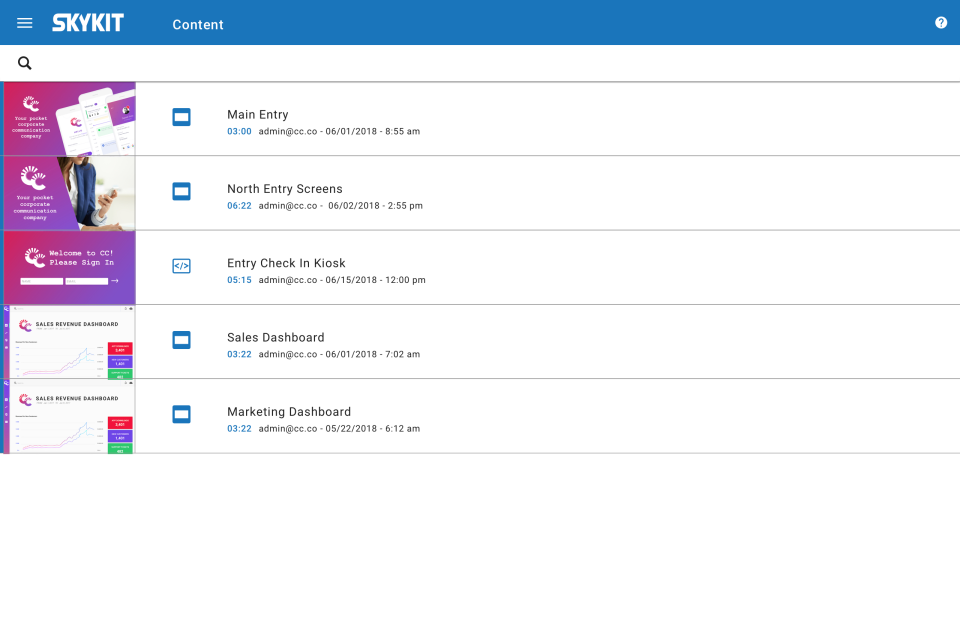 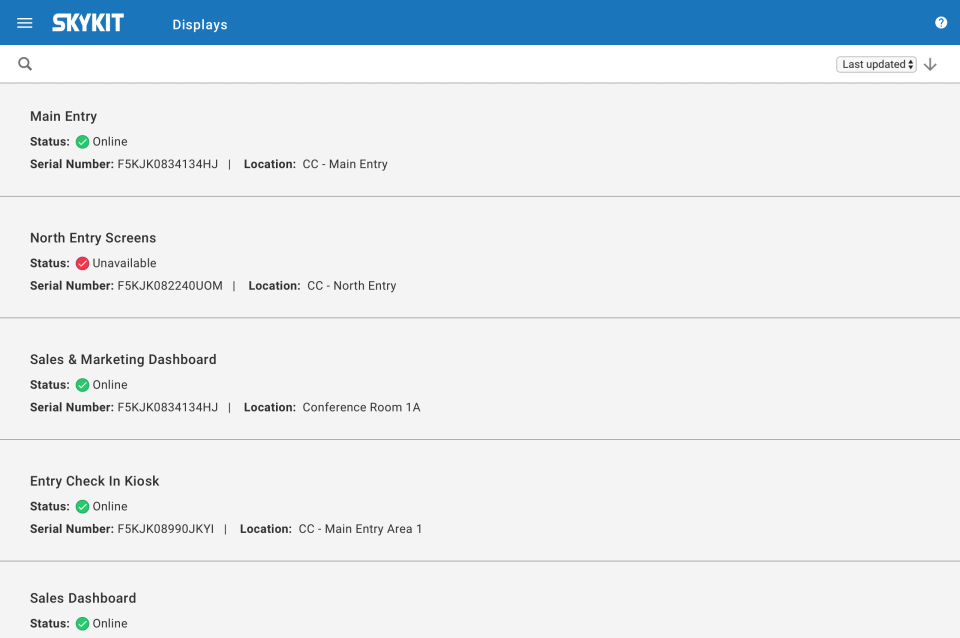 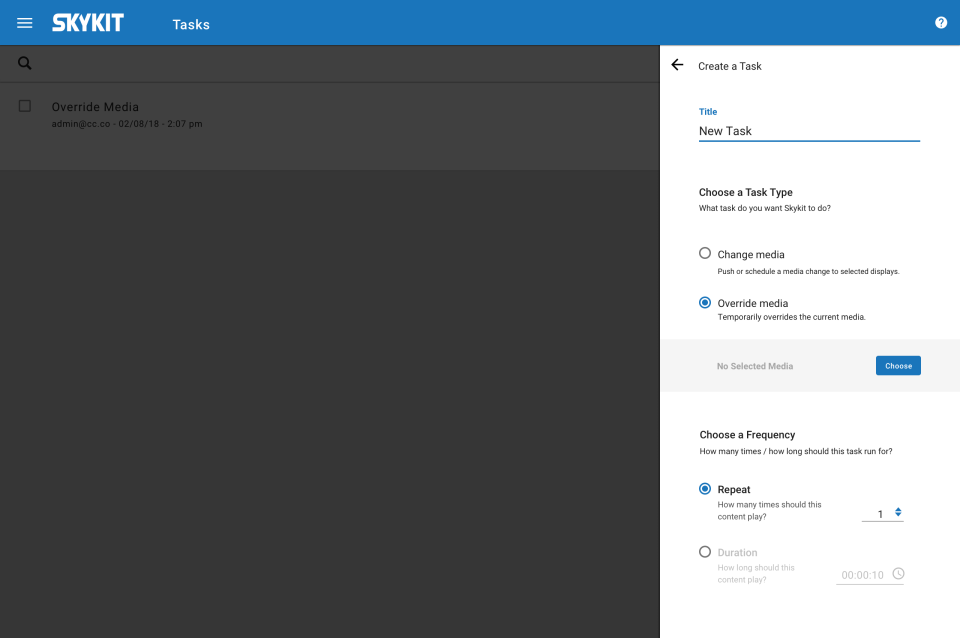 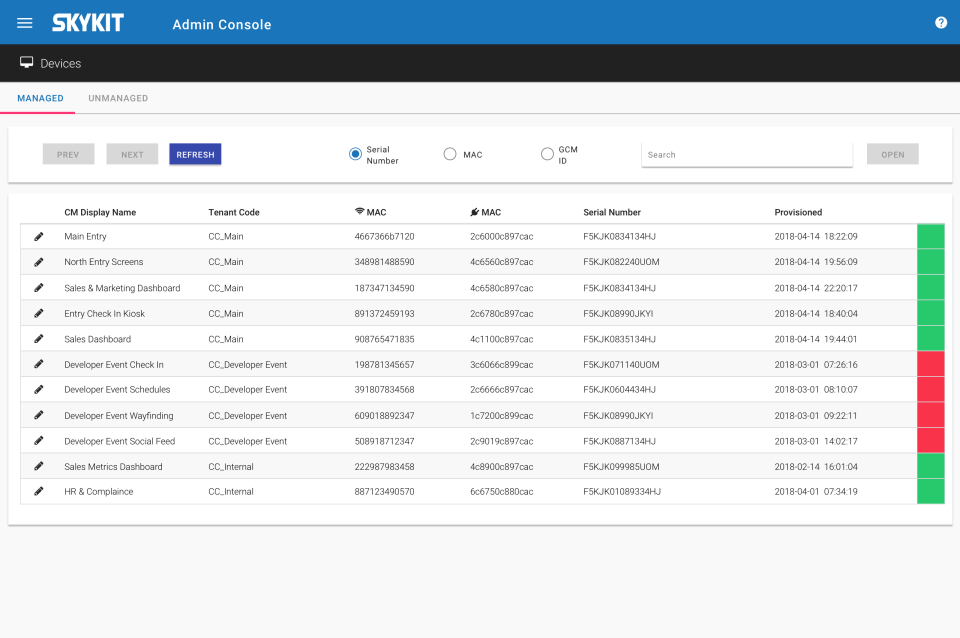 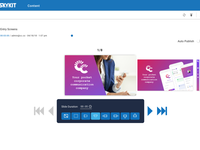 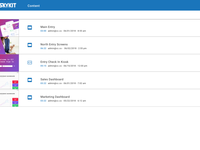 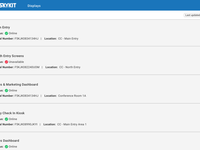 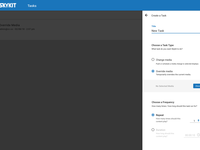 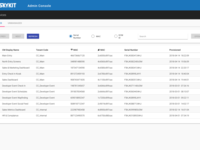 Opmerkingen: Great support. We love it.

Pluspunten: I love that it is directly integrated with G Suite and Google Slides, Drive, etc.

Minpunten: My only complaint so far is I can't figure out how to add things that will auto-update, like the current date and time for example.

"Used to be better"

Opmerkingen: We loved it at first. It was a great way to showcase content to our office and keep them informed on updates. The last few months of using it, though, it became more of a nuisance than anything.

Pluspunten: It's fairly intuitive and the UI is nicely designed.

Minpunten: The syncing from Google Slides to Skykit used to be a lot better. My office used Skykit for about 2 years, and in the last several months Skykit stopped registering the updated slide's changes. You would see the update in Skykit when you looked at the slide, but then when it played on the screen it would be the old one. Eventually I realized that the publish date was still the old one, and I figured out a workaround where had to go in and change the length of the time the slide would play. Only then would the system register the updates and publish with the new content. The other con is the playlist functionality is quite klugy. It takes forever to move slides around because the screen lags and doesn't place them where you're aiming your mouse. It also doesn't scroll with your cursor, so if I wanted to move a slide way farther up on the playlist, I could either move it up only 5 at a time, or I had to zoom way out on my browser.

Opmerkingen: Overall it has been pretty easy to setup and implement. It seems to be a bit harder to troubleshoot and manage, with a lot of maintenance having to be done on the SkyKit side, and not as much management and control on the administration side as a customer.

Pluspunten: The best thing about the software is its scalability as well as its ease of use.

Minpunten: The fact that I am not able to centrally manage the chrome OS side of the chromeboxes that are used to run the SkyKit Content. The SkyKit Content however I feel can be expanded with extra features that can help with organization of displays, better content management within the console, as well as better overall performance improvements with content getting updated.

"One of the best overall CMS."

Opmerkingen: I have beat up on a lot of CMS systems in the past year. SkyKit is very user friendly. It has a 5-five tech department. Between Customer Service and DevOps. They are on the for front of making Content Management easier than any others out there. You can tell that they believe whole heartily in SkyKit; and it shows in everything they do. From taking request and fixing problems. Even the most trivial is not over looked with them.
I enjoy that the people are not one to ask for help from others in their own company; instead of giving you a blank answer that raises more questions.
We are currently swapping our old outdated CMS for SkyKit and the transformation is seamless. If you even want that down home feel from an advance CMS Company? SkyKit is for you.
Respectfully,
Theodore "Ted" Burch
Technology Support Technician

Pluspunten: The help that comes along with it.

Minpunten: What I have least liked about it. SkyKit has or is fixing as I type this.

Opmerkingen: Our experiences in schools and small businesses has been overall very satisfying.

Pluspunten: The integration between Google accounts and their CMS portal is great. As people get more comfortable with Google: Docs, Sheets, and Slides, having that integration makes building presentations very intuitive and easy.

Minpunten: Having a live display of what is broadcasting, kinda like a hub view of the different screens would make this software better. Relying on what the "content" is titled and visual checking of screens is a bit annoying.