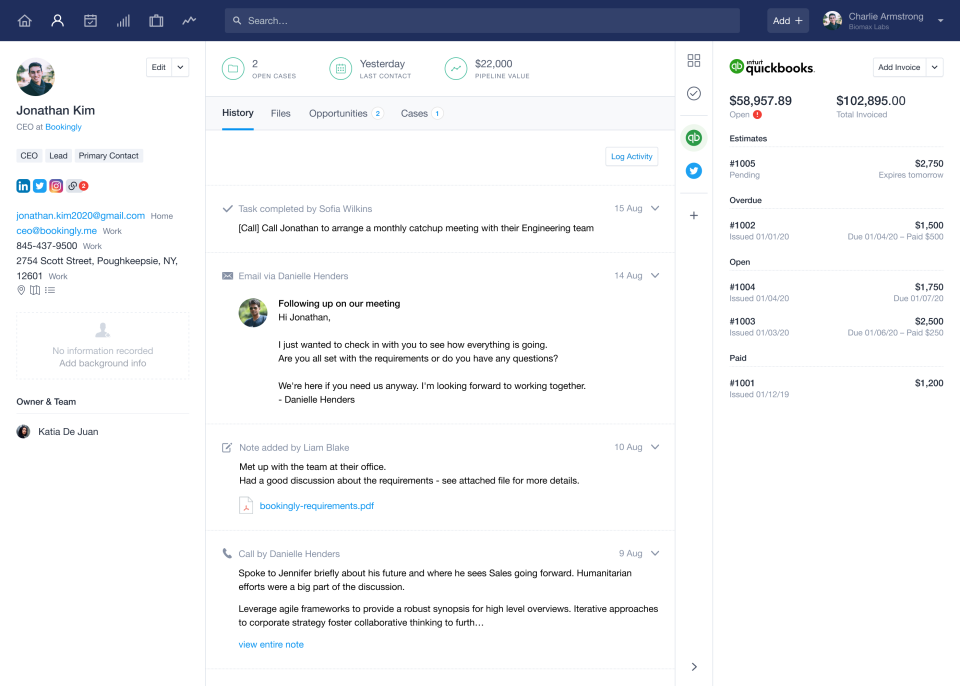 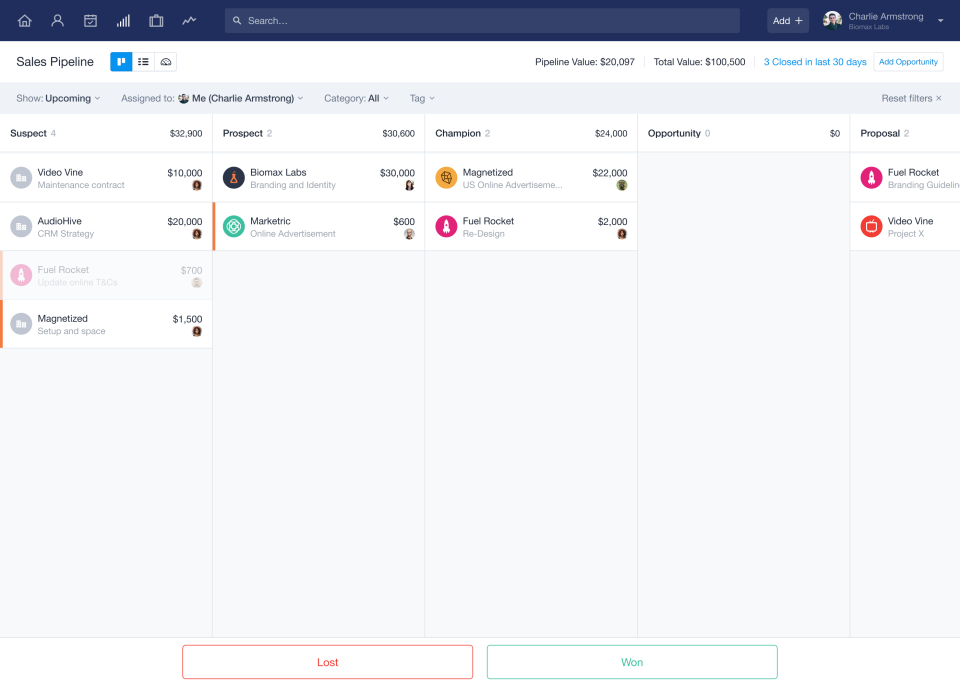 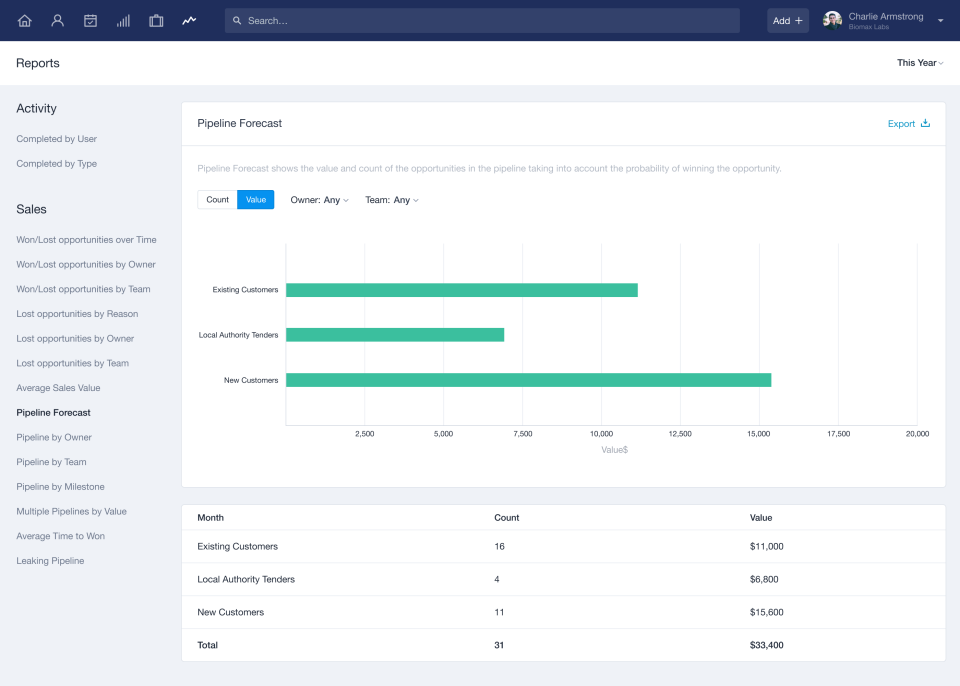 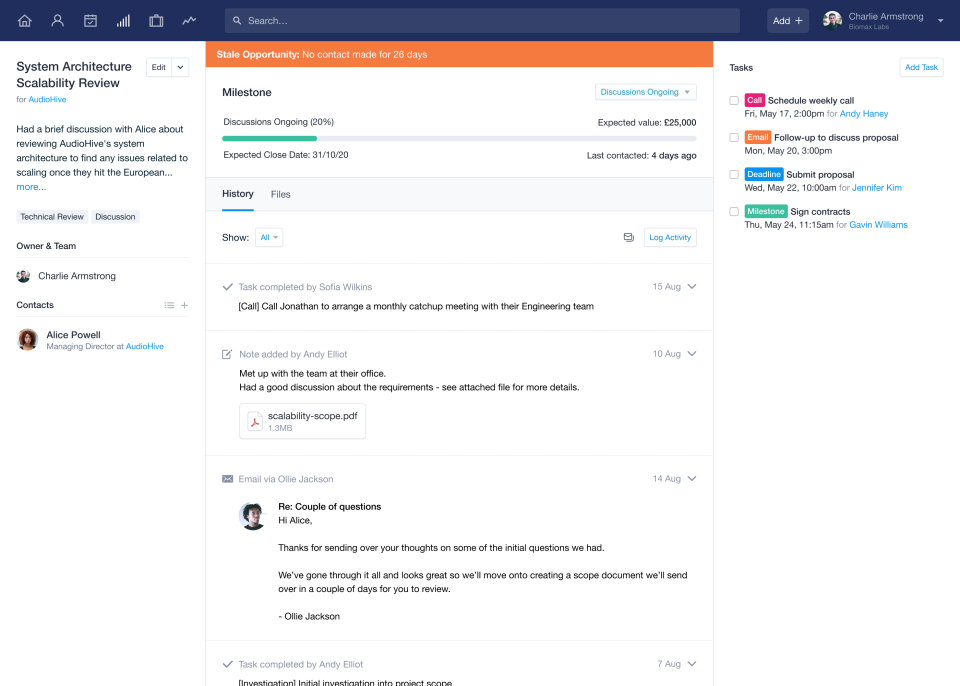 Opmerkingen: Overall experience was positive. It's a solution that I recommend to people.

What initially attracted us to this CRM was its cost effectiveness. I was impressed by how easy it was to deploy and run. The mobile app was pretty solid, easy to use and probably better or on par with some of the other (more expensive) CRM apps I've used. ~Capsule also had a decent project management function.

I think we had some trouble when trying to connect to Mail Chimp. From memory it took a long time to get it right.

Hi Ilia, Chloe here from Capsule. Thanks for taking the time to write a review. We're happy to hear that you found Capsule easy to deploy and are enjoying using the mobile app. If you ever need any help for example setting up integrations then don't hesitate to reach out to us at [email protected]

Opmerkingen: I've been using Capsule for several months and I am very happy. Occasionally I try other apps just to see, but none of them are as easy to use. Capsule feels like a gem of a CRM in a field crowded with lots of apps. If you need reminders of who to follow up with and when, Capsule does that really well—and can grow with you as you grow. Next year I'll likely need to upgrade from the free level, and I'll gladly do so.

As a service provider I have a lot of contacts to track. I tried several CRMs (Hubspot, Monday, etc) but none were as simple to use as Capsule. I had basic needs: track new contacts and set reminders to follow up. While other apps had those features alongside dozens of other tools, Capsule made it very easy to start tracking and reminding right away. And that's on a free level! The Gmail extension works really well and makes adding tasks quick and easy.

If I was nitpicky, I'd say maybe a more modern design. But it's not strictly utilitarian, and it's simplicity makes it easy to do what I need.

Redenen om over te stappen op Capsule: Other CRMs were pretty complicated for what I needed. I first tried Hubspot, but I was lost in all the features. All I needed to do was set reminders to follow up with people. While the other CRMs do that, it felt like I had to swim through a dozen other features to get there. I was able to start using Capsule immediately and knew exactly what to do. And with the Gmail extension, it's even simpler.

Hi Jesse, Chloe here from Capsule. Thanks for taking the time to write a review - that's really going to help other people considering Capsule. We're happy to hear that you're finding Capsule so easy to use, especially compared to alternatives you considered and that it's helping you to do what you need to.

Why I Acquired Capsule

Opmerkingen: My management of clients has improved dramatically.

CAPSULE is extremely easy to use and is built for users, not programmers. Developing one's knowledge and understanding developes in easy steps and is well supported by superb documentation

I have not come across any to date, including webcam training , on line documentation

Hi there Graham, Chloe from Capsule here. It's great to hear that you have found Capsule really easy to use and when you've needed to use them, the support documents have helped you out.

Lacked Calendar tool needed for us to be effective

Opmerkingen: It was an adequate tool but didn't fulfill enough of our needs for us to continue using the software.

I found the software easy to use and fairly intuitive for the everyday user. It managed leads adequately and allowed me to find my information easily.

We needed a tool that would allow us to easily track booked events on a calendar and see trends of inquiries for specific dates. Capsule lacked an effective calendar tool to help us manage leads by date which made it ineffectual for us.

Hi there April, Chloe from Capsule here. We're glad you found Capsule easy to use and helped you manage leads well. We're sorry to hear that in this case Capsule didn't quite fit your needs - thanks for giving us a try!

Thoughts and opinions on Capsule CRM

Opmerkingen: The Free CRM segment of this market is flooded with products which promise a lot but deliver very little - then attempt to extort money for what was billed as a free service. Capsule's most redeeming feature is that it works and it really is free to use - integrity like this is a BIG plus for a business like ours.

I like the fact that it's very easy to set up. Adding new contacts and their respective organizations is swift and seamless. What I like most about Capsule is that it is a proper CRM system which is made available to small businesses free of charge - when we've grown enough to warrant spending money on CRM - Capsule has already crossed the finishing line.

There are some GUI flaws which make navigation a little difficult, but these are merely tweaks to what is a robust and simple-to-use system.

Hi David, Chloe from Capsule here. We're really pleased to hear that you're enjoying using Capsule and that it's helpful for your business.