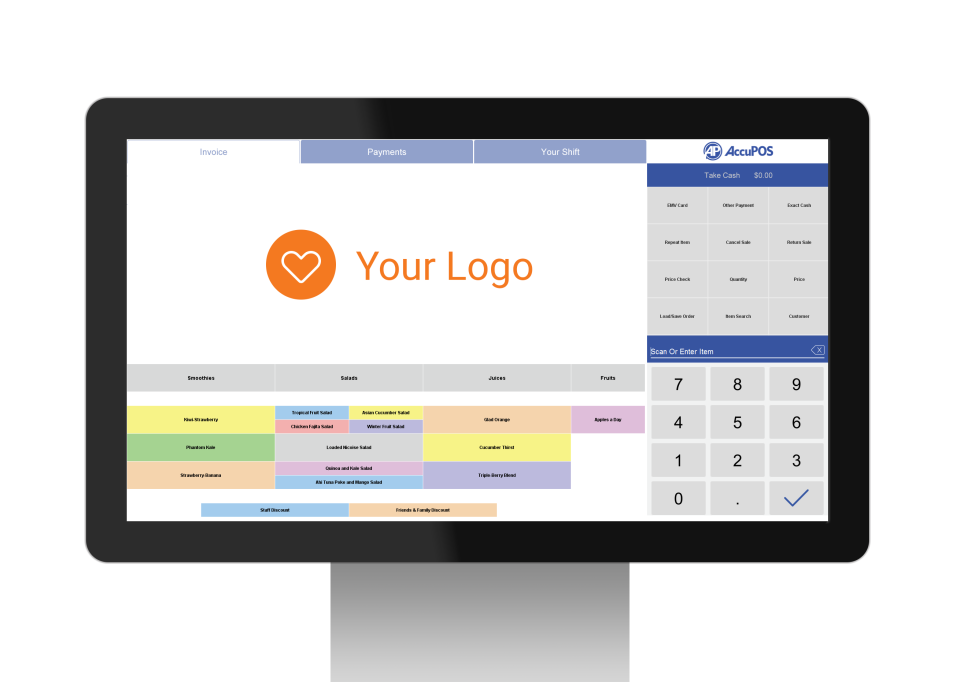 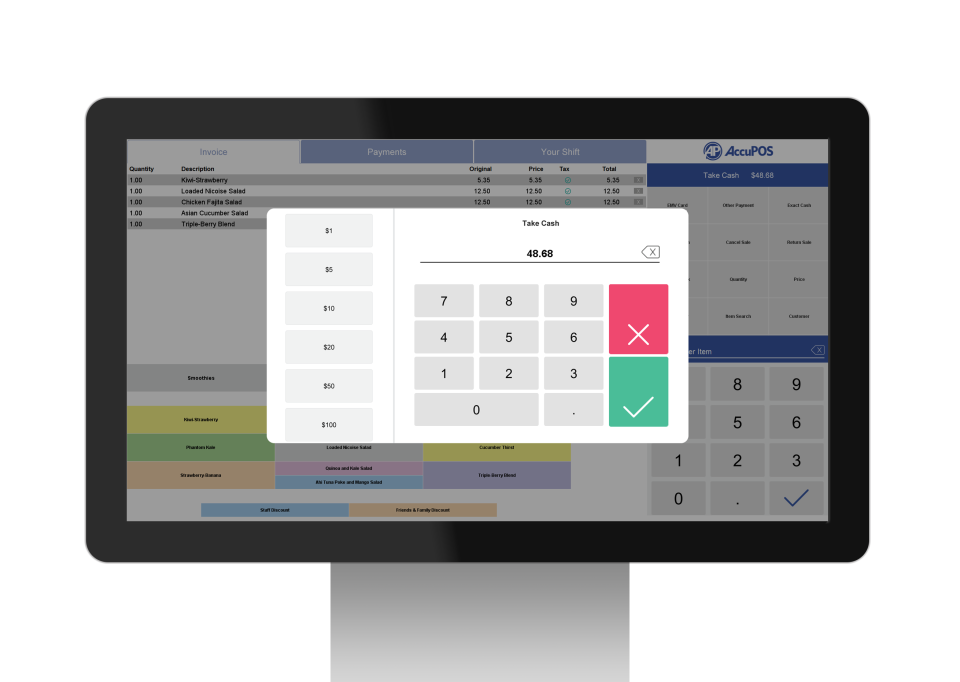 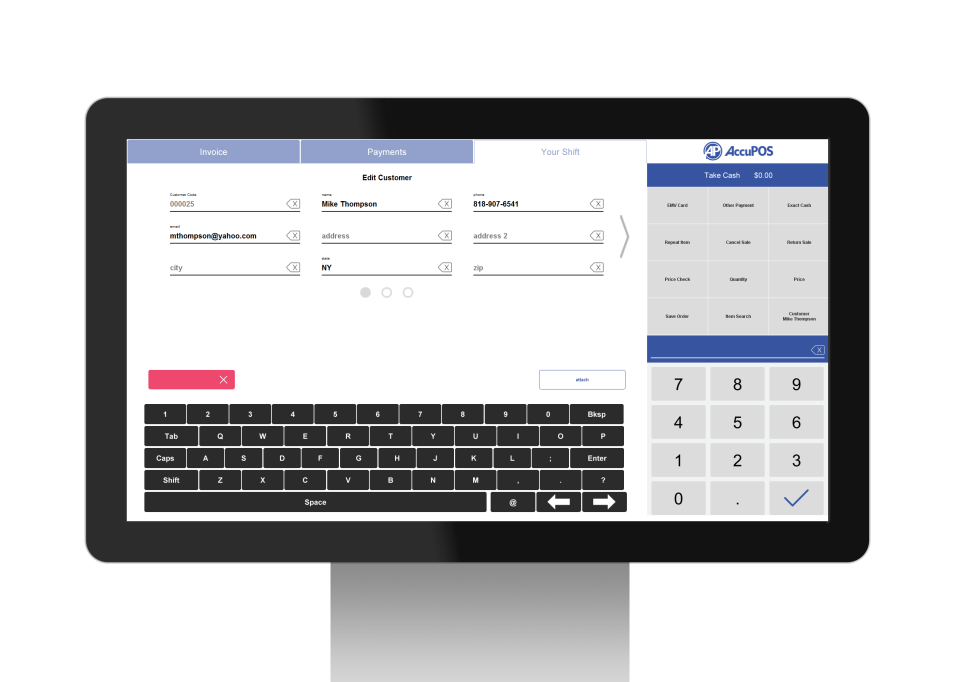 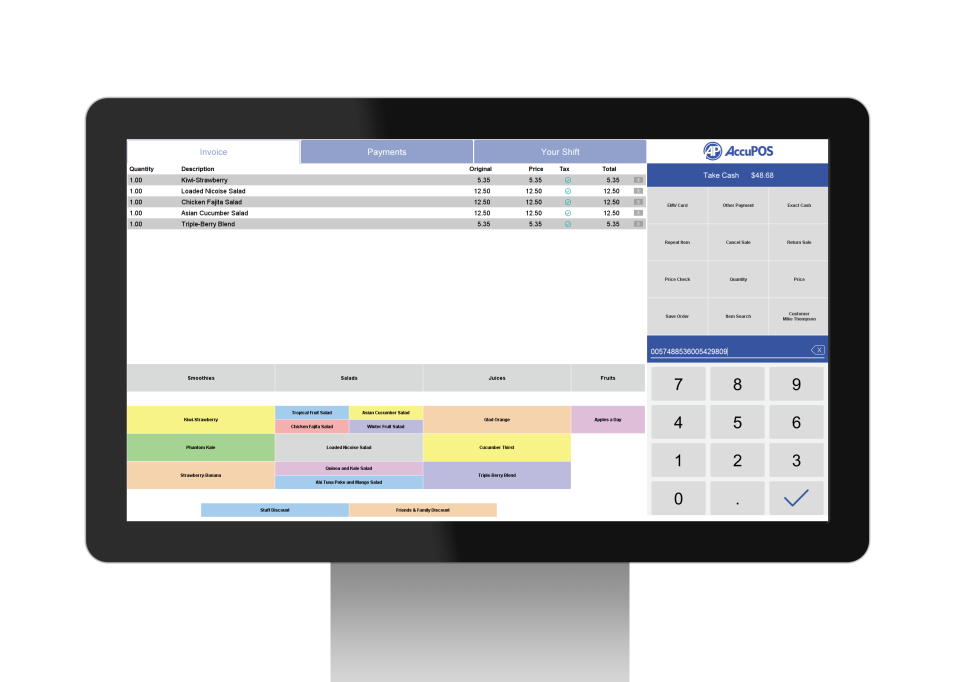 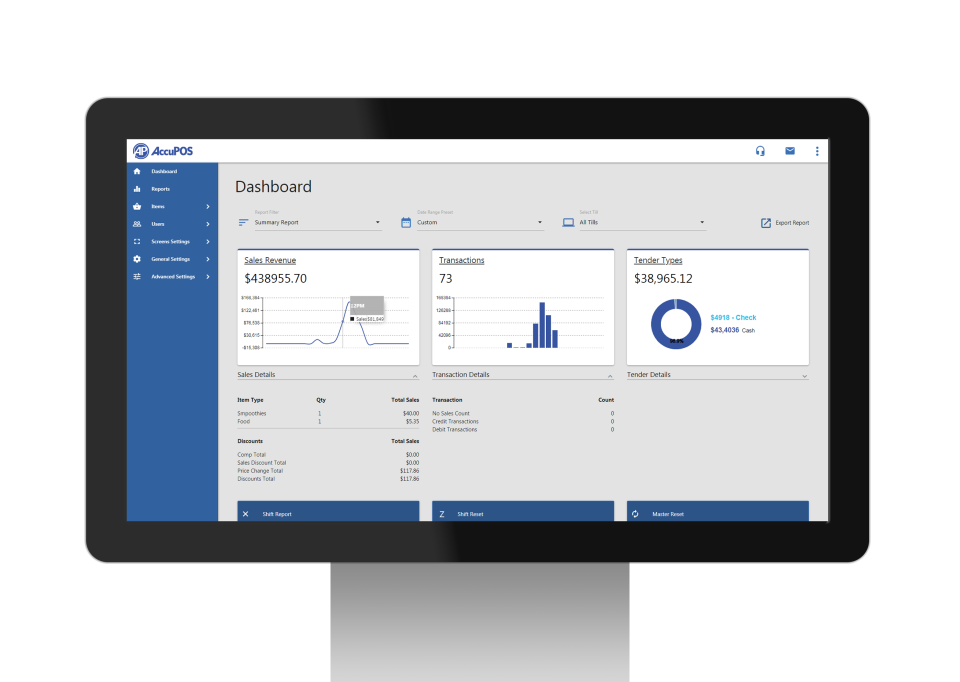 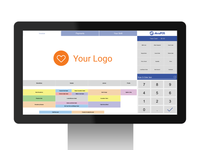 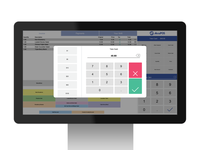 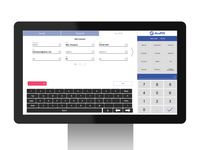 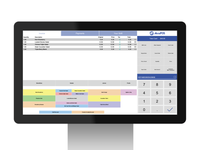 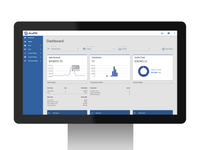 "Good for a quick paced business"

Opmerkingen: Customer's trust in being efficient.

Pluspunten: This System really helps make sure the flow in my workplace is constantly moving. We have to be a well oiled machine, and customers expect that pace, so this is a great program and I am glad we use it.

Minpunten: It took me a little bit longer to learn since I am used to a different POS, but that might be my own muscle memory getting in my way

"Over a decade of reliable service and product evolution."

Pluspunten: There are two main reasons I originally gravitated towards AccuPOS, which continue to set it apart from the competition. The first was the fact that it integrates with and stores data in QuickBooks, thus providing a powerful, mature platform for product entry, inventory management and reporting. The second reason I was attracted to AccuPOS is that it also stores data in a Microsoft Access-compatible database format, allowing me to do powerful customized data mining and analysis. Over the years the software has improved, and more recently I have been impressed with the new generation (2015) of the product, which has taken it to a new level of sophistication. Lastly, we have had a very good experience switching to integrated credit card processing with Mercury Payment Systems (the AccuPOS partner), speeding up our transactions at the point of sale while lowering our rates.

Minpunten: I have no major complaints about AccuPOS. The biggest problem with it is probably that it is not a large software vendor with a massive sales volume, and therefore their product does not have the same level of maturity and sophistication that some might expect. However, in this price range one will inevitably encounter limitations and software quirks with any POS solution. Earlier versions of the software definitely suffered from some clunkiness, although with the 2015 release much of that has been eliminated. One thing they could have done better is to communicate what a major change it was going to be to upgrade to the new generation of the software so we could have planned for the down time and necessary adjustments to adapt to the new system. The other difficulty I will mention is their method of verifying the software registration, which has caused us some problems. In order to verify that the software has a valid registration it must communicate, via the Internet, with their registration server each time it is started. So when their server is down AccuPOS cannot verify its registration and the software disables the ability to z-out until the registration has been validated. Also, at our location we have redundant, load-balanced Internet connections and there have been ongoing problems with our registration being validated to a specific IP address.

Opmerkingen: IF YOU BUY THIS PREPARE FOR YOUR ACCOUNTING SOFTWARE TO TAKE A CRAP, PLAN TO BABYSIT THE PROGRAM TO ENSURE IT IS RUNNING PROPERLY. AND BE READY FOR THE PROGRAM TO MISS SALES, TO DEAL WITH THEIR I.T WHO ARE ALSO CONFUSED ON WHY WE ARE SET UP LIKE THIS AND ARE NOT TRAINED TO HANDLE PROBLEMS ON A WONKY PROGRAM!!! AND THEY HAVE NO CLUE ABOUT CANADIAN BUSINESS AT ALL NOT EVEN TAXES!!!

Pluspunten: IT SHOULD BE EASY TO USE & IT WAS NOT. !! OVER A YEAR AND THEY STILL CANT GET IT TO RUN PROPERLY. NO MANUAL SO YOU HAVE TO PAY FOR TECH SUPPORT!! OR WASTE $$ AND GET ANOTHER PROGRAM.. JUST BUY ANOTHER PROGRAM!!!

Minpunten: IT IS NOT EASY TO USE, SET UP AND DOES NOT RUN PROPERLY. I HAVE OLD PROGRAM SERVER AS THEY COULD NOT GET THEIR UPDATED TO LOAD AND RUN PROPERLY, BUT HAVE THE NEW PROGRAM. THEY WILL NOT GIVE ME THE NEW SERVER PROGRAM, WOULD NOT REFUND MONEY AFTER 30 DAYS WHEN IT WAS NOT RUNNING PROPERLY.

"A Journey in to the land of POS"

Pluspunten: Complex functionality with simplicity of use and configuration. AccuPOS is always a quick phone call away with never a long wait on the phone.

Minpunten: Nothing. There will be glitches, and since the primary OS is Windows based, you will have to deal with Updates very often, as well as updates to JAVA. It would be interesting if a version for MAC would be available, but then you'd have to find the right combination of peripherals. Most of the POS world is built on the PC platform except for silly POS posers like Breadcrumbs. PC's crash, they hang, and always at the worst time, of course you need to choose your Credit card processor carefully too. I want AccuPos to build a robust loyalty module that works with their new signature pad, capturing emails for marketing to our customers.

Pluspunten: The first pro for this system is the price, much much lower than other companies and NO EXTRA LICENSE FEES. We have the system installed on two manager PCs to manage inventory levels, items, and interface- as well as the complete POS system in our retail store. We were not charged anything for the extra access, and even had help getting it set up on both extra computers. I enjoy the ease of use. Our older generation of employees have no problems navigating the menus or performing complicated tasks with the system, we can even make the buttons on the POS as big as we want for those with sight issues. The customer service is completely amazing, we have never had to wait on hold or get a call back for a question we had. They are very knowledgeable and eager to help, I have already recommended this system to others in our industry.

Minpunten: There is not much negative about this system or it's company. The only thing that comes to mind is the item listing. In the manager section where the products are added, priced, and tracked, there is no way to completely delete an item. You are however able to make it "hidden". I would like the ability to remove the items I no longer carry completely, but that's the only negative I can come up with.