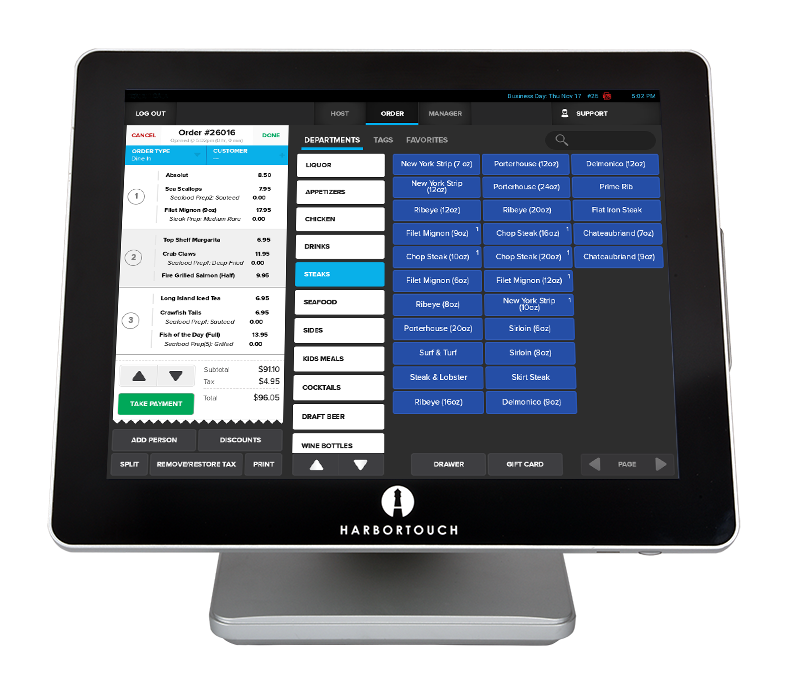 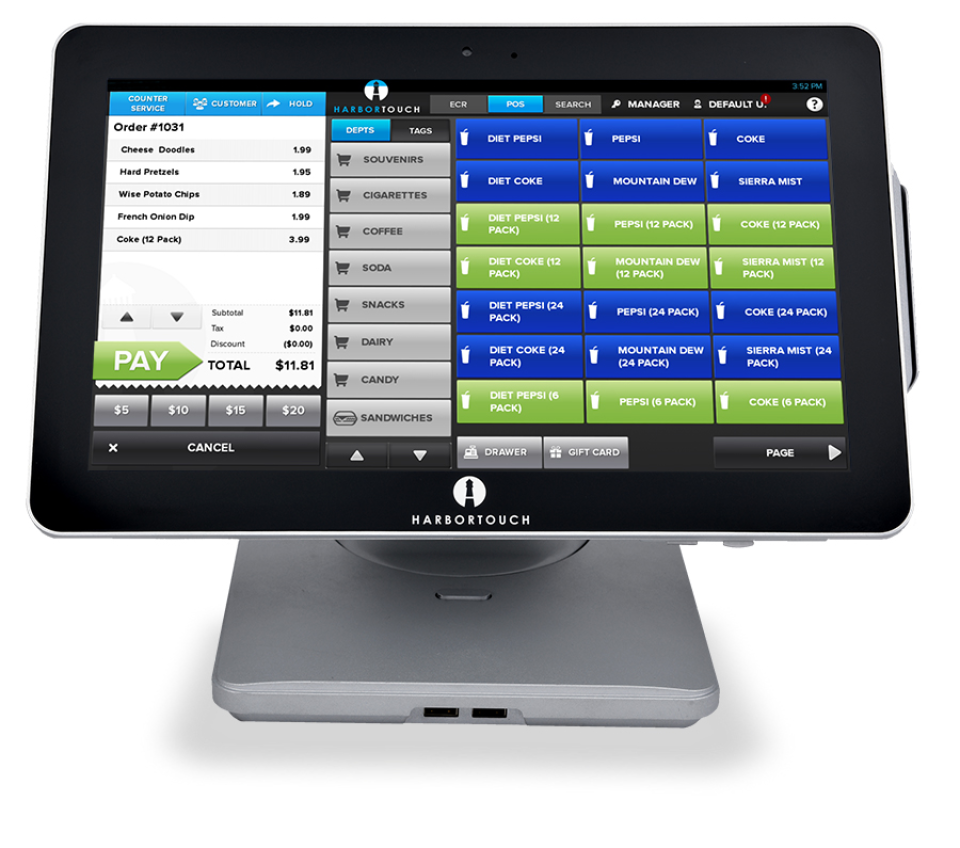 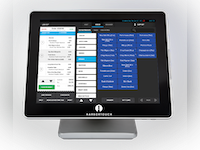 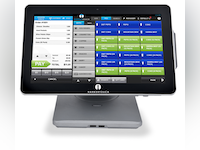 3,6 /5 (25)
With Franpos you will experience the benefits of cloud technology with a simple to use and beautifully designed POS system.
Bekijk profiel Vergelijking bekijken

5 /5 (7)
DESSERT point of sale gives you reliable and easy-to-use tools that will help you be more efficient and run your business better. .
Bekijk profiel Vergelijking bekijken

2,5 /5 (4)
On Premise or Cloud based solution for single and multi-location food service operations and retail outlets.
Bekijk profiel Vergelijking bekijken

Opmerkingen: I felt they were a great partner and excellent product. I have no idea why anyone with a small to medium restaurant would use any other product.

Pluspunten: So many things to like! The price was EXCELLENT compared to the competitors. The ease of use was so simple. When it was installed our menu and pricing was in place. When we had to add employees or make menu updates they were so easy to do right at the main register. Pulling data for sales tax, payroll etc was easy as well. Customer services was EXCELLENT as well.

Minpunten: I don't know that there was anything I didn't like to be honest. I had zero complaints from myself and the team using the software daily.

Thank you for sharing your feedback with us! We are happy to hear that your overall experience with Harbortouch has been positive. If there is anything we can do to further improve your experience in the future, please email us at [email protected]

"STAY FAR AWAY FROM THIS COMPANY"

Opmerkingen: My experience with this company is non other than a nightmare.
This company charges ridiculous fees because most people don’t look at their bill closely and I would URGE YOU TO REVIEW YOUR BILLS FROM THEM!! They charged me excessive fees and when I called to discuss it they lied and told me they were overcharging me and would refund/credit me. They never called back which is THEIR MO. The woman [SENSITIVE CONTENT HIDDEN] is a liar and is very unhelpful. They try to make it so that you cannot cancel their services by lying and telling you that they never received the cancellation forms.
I personally sent their cancelation forms back to them after they finally sent them to me which was worse than pulling teeth. They received it and still continued to charge me fees. My bank was instructed not to accept any charges from them because they are fraudulent. They still continue to try to attempt to charge my account for monthly fees after being cancelled. I have no ongoing contract with them and they still continue to create fees. They are a disgusting company and I will be filing a BETTER BUSINESS BUREAU COMPLAINT. I would stay far away from this company. And If you currently use their service check your bills. This isn’t a review because I found someone cheaper because cheaper isn’t always better. This is a review because this company is trying to shake me down for money that is not owed to them. They are a disgrace

Pluspunten: I liked paying to overnight their Terminal and wiring back to them.

Minpunten: STAY AWAY FAR FAR AWAY FROM THIS COMPANY

We are disheartened to hear of the frustrations you've encountered during your cancellation process and would like to sincerely apologize. We would like to speak with you further to learn more about your concerns and work to resolve them. At your convenience, please send your Merchant ID number along with your contact information to [email protected], and one of our team members will reach out to further assist.

Opmerkingen: On my first day I called very excitedly to set up the system and no one answered. It took hours for them to answer. It was then that I had a sinking feeling I've been had!

Pluspunten: nothing. your phone can do more than this outdated scam of a system. NEVER get a system that requires you to use your personal ID. They attach your debt to you as a person not to your business.

Minpunten: I won't bore you with my personal feelings. Let me bullet point the cons.
1. OLD, OUTDATED SYSTEM. The system is as basic as it can get. Think Android in 2005.
2. You have to be an expert to manage the SMS and email markteting. They outsource that portion of the POS.
3. No way to do online booking eventhough they say you can.
4. 24/7 support? Heck no. The support is made up of newbies who read of a list and can NEVER help you solve a simple problem. They would put me on hold for hours to try and figure things out. None of the support staff know the system at all.
5. The system claims your clients can book online but its a LIE there's no link or anything available for clients to access the booking. I really tried to resolve this by calling 5 days in a row and trying new support members but it was always the same.
6. If you have a high volume of sales the system will shut down in the middle of a credit card transaction or in the middle of me booking a client. I would have to ask the client to do the whole process all over again. emberrasing!
7. No apps, no way to communicate with clients regarding their appointments.
8. When you set up your images for your modules it's a nightmare. You can't upload your pictures like any normal system. The pictures don't resize and you can barely see them when you sync your system. It's like working on a super old program.
9. The credit card system goes out almost every single time I use it. I lost money bc I cant tell if a pay

Pluspunten: NONE! There is nothing about this system that is acceptable. They update in the middle of the day!, system always crashes, very poor customer service,

Minpunten: We have had the Harbortouch POS system for over two (2) years. We regrettably signed a three (3) year contract. Since day 1, we have had nothing but trouble. The system can go off line numerous times, or freeze up, throughout the day, generally when customers are waiting. This is extremely bothersome when you are trying to charge a credit card. Added to this, is that this company has one to the poorest customer service I've had the displeasure of dealing with. Today, our system went down three times during sales, with the last time the POS froze up. One was with a credit card purchase, thankfully the customer was very understanding and used cash instead. Once again we had to call customer service (which is poor) and once again we were put on hold for over 35 minutes. At first, the customer service rep said to just turn off the system, and turn back on -- rebooting ---- informed him that has already been done, then he put us on hold again. He returned to tell us that 'yes' there is 'something' wrong with their system, they are working on it, and it should be around an hour or so. When asked about credit card sales, his response was that we could always call the credit card company! Unacceptable when you are running a restaurant and the customers are waiting to pay. Customer Services' attitude appears to be that 'we have you under contract... hahaha. I know another merchant who also has Harbortouch, and has the same problems and complaints. This is a "POS - POS"

Opmerkingen: I’d rather step on legos barefooted for 10 miles than use this company again.

Pluspunten: We’ve been with this company for 4 years. Only having signed a 3 year contract.
Due to covid, we had to move our store and severely downsize to be able to keep our doors open. This meant getting rid of the 2 POS systems we had with Harbourtouch and going with something cheaper.
When we called to let them know to cancel, we were told it’ll be taken care of. Well, wouldn’t you know it, the contract wasn’t canceled and they kept charging. They then tried to tell us, we automatically renew for a year if we don’t call at the 3 year mark. Which is a lie and shady business.
That was 4 months ago. Three of which, we received some sort of charge.
We have been told for well over a month that they’ll give us back the funds they stole. We’ve lawyered up and will see how it goes.
DO NOT DO BUSINESS WITH THEM!
They’ll lie and steal from you.

Minpunten: It crashes. Constantly. Be prepared to deal with loss of sakes and upset customers.

First and foremost, we would like to sincerely apologize for the difficulties you have faced during COVID and with closing your Harbortouch account. We were able to locate your account in our system and it appears that the refunds you were inquiring about have been successfully processed. Please allow 3-5 days for the refund to be issued. If there is anything you need in the interim, please email [email protected] and one of our team members will get back to you as soon as possible.