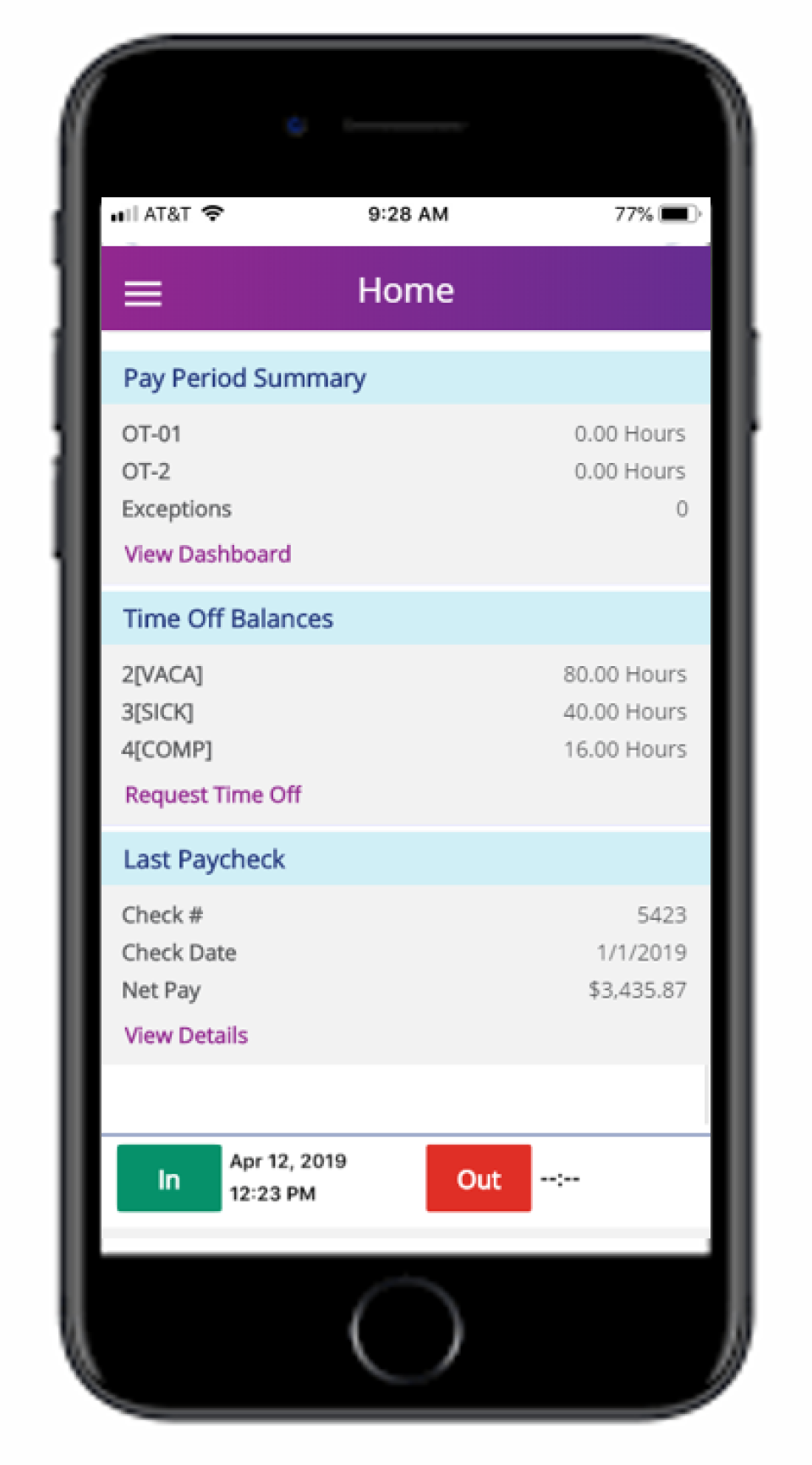 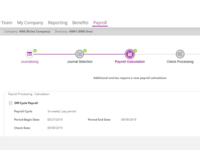 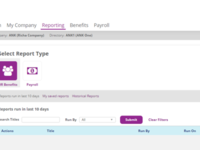 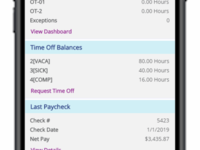 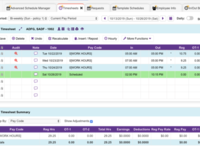 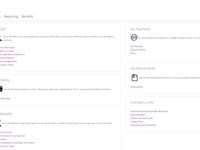 4,9 /5 (12)
A human resources software to meet all the needs of your collaborators.
Bekijk profiel Vergelijking bekijken

Pluspunten: My light in to this software was one of the very first things I received as a new hire. Helps keep me on track, as far as work performance goes.

Minpunten: Everything is pretty simple so far. Very user friendly and easy to navigate.

Opmerkingen: We've used HR Office for about 20 years now -- started out with the in-house Access version and have used the .asp version since about 2001/2002.

Pluspunten: I like that it's cloud-based, but most importantly for us, it offers employee self-service for PTO requests and information updates. The key reason we've stayed with this system is that it provides automatic calculations of paid time off based on a formula we set up, automatically changing accruals on employee anniversary dates. It also allows us to easily calculate PTO that will be earned through the end of the fiscal year since we allow staff to schedule (and generally use) PTO in advance of accrual. The calculations take into consideration any accrual rate changes and adjusts out any dates already scheduled. There are other HR solutions with a simpler interface, but this feature was a deal-breaker for us. The PTO request workflows can allow for more than one approval level and sends email alerts. Support has generally been very good in all the years I've used it.

Minpunten: We only have 30 staff members, but years ago, they implemented a rate based on a minimum of 50 users. We recently implemented the self service to manage PTO requests and overall, we're thrilled to have made that move (we have multi-tiered approvals, which they didn't have in the past). I would really like to have more customizable fields in the request form to prompt the user for key information the supervisor needs to make an approval decision. The interface is sometimes very slow to load for the HR admin (it's a remote desktop configuration). Some of it's not intuitive -- when setting up a new employee and their PTO accrual, we get a prompt that the person is not employed 40 hours (part of our PTO calculation criteria), but rather than the person's hours worked being in the main employee tabs, you have to click out and go to a completely separate area to indicate that they are full time.

Opmerkingen: What took it over the top with poor satisfaction is that they tried to be good partners but as of late they just throw in the towel and want money.

Pluspunten: Ascentis does the benefits, applicants and other HR functions on a basic level. Let me stress basic level.

Minpunten: If you want any integrations or some of the complexities when have beyond 100 employees, would suggest not utilizing Ascentis. Coupled with the added burden of the 1095-c and the need to manually update various records because Ascentis has software issues, it is disappointing.

Opmerkingen: I have now had Ascentis HR for 2 months, and Payroll for a month, and I can sum my experience up in 4 words:
Thank goodness for Ascentis.
We are a small to medium company with the unique feature of being made up of multiple FEINs. We are also on an aggressive growth plan in terms of expansion. Although the company has been around for more than 30 years, it's only been in the last 5 it's gone from a small family business to a regional (soon to be national) distributor.
When I took on the position with this company to build a HR department and functions, one of the task requirements/ requests from the owner was to bring payroll inhouse within the first year. Payroll was being managed by the accountants, and it was neither cost-effective or timely; corrections were always a challenge. The existing HR software, Sage, was full of bugs and not managing tasks effectively. Much of the historical data was inaccurate, as well.
Literally, I was printing out time punch reports, manually entering onto a spreadsheet, and at the end of the paycycle emailing it to the accountant with all changes/corrections the very next business day. And then sending someone an hour away to pick up checks. And same for corrections. Not anymore.
I did quite a bit of research early on for the right system. The multiple FEINs made some systems much more expensive. And even though I'm in a culture that has been embracing change, I knew doing everything at once would create shock waves. Additionally, the projected growth made it so easy, expandability was a absolute necessity. Finally, the system would need to be easy enough and intuitive enough to teach a Vice President to be an emergency backup.
Selection of Ascentis was easy, actually. I asked lots of questions, and the response was usually either "oh, yes, of course, this is how we do that...." or "that does sound a little different, let me check" followed by "ok, this is how we can do that for you...". Things fit nicely.
The implementation team has been wonderful. They made it easy, making sure I knew what they needed and when, and kept me updated on their statuses as well. I unexpectedly had to move up one of my timelines as my previous system had a different renewal date than I was originally told. It took two months to implement HR, and 3 to do Payroll, which in terms of transition is lightning speed. This is particularly true as I had other major projects going at the same time. Christy, Jean, Kimberly and the rest have been great about letting me mess around with it before going live, and been there to answer the phone as my safety net as I spend time double and triple checking things when I went live. We have had a few minor tech problems, and Jack solved them quickly and easily.
Training was almost too much. There are videos, live demo, handbooks, and the team calls. They have been great about letting me do that part at my own pace.
Once piece of advice: if you have more than one location, use the tax service. Payroll does not print coupons and is a little less helpful with the who-when part (although the related reports are awesome.)
I have now had two zero-error payrolls; I had to make up mistakes to learn how to do that piece! We are likely adding Tax very soon, and anticipate adding Time later this year. We are eventually going to add self service.
Ascentis has wonderful reports, and has cut the time involved significantly. It's less expensive, and just so easy to use. Even the Payroll person at the accountant who did it before is jealous.

Opmerkingen: We had always outsourced our HR and payroll, and as a rapidly growing company with more offices opening around the country, we were outgrowing the functionality of the third party HR firm; not to mention the enormous costs of their service fees, inflated benefit premiums, and customer service issues. During my research of in-house support software, Ascentis stood out for its completeness. There is a lot of software that will do HR, or payroll, or timekeeping, but I wanted something that was already built to work and flow together. I was looking for something that would provide a high level of detail in data storage and maintenance, as well as be customizable for the way we already operate. Ascentis definitely provides all of that, and has a good user interface as well. I appreciate how comprehensive it is - I'm happy that it handles our taxes as well as manages data flow to our benefits carriers through Carrier Connect. We began implementation in July 2012 and currently we use Time, Self-Service v 8.4, HR v 8.5, and Payroll 4.2.1. Since we started, there have already been big upgrades to Self Service and HR that has resolved some of the issues I was having. We have done an open enrollment already using the Self-Service, which creates a walk-through wizard for employees that makes the process of learning about company benefits and signing up for them really easy. The housing of the benefits structures is detailed and I was able to automatically build in nearly all the rules or restrictions that were associated with our plans. Implementation went smoothly overall - it was a daunting task but the support is terrific. Everyone I've talked to in all the software components are very available and patient, and extremely responsive. This was one of the most important considerations for me. This being our first time handling HR and payroll in-house, I knew we needed to work with a company that we could have a personal relationship with, and not be lost. I also appreciate the fact that the software is continually upgrading and improving. I do not expect anything to be perfect; it is more important to me that they are working to improve and are responsive. Any issues I've had, they have received thoughtfully and log the suggestions/needs to submit for potential changes. I'm extremely happy with the product and the company and look forward to continuing working with them.